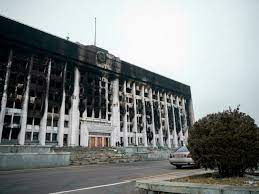 NurSultan, Kazakhstan: The influential son-in-law of Kazakhstan’s ex-president resigned as head of the leading business lobby Monday not long after public anger at perceived corruption in the Central Asian country boiled into a deadly crisis.

Following days of internet shutdown, prosecutors said Saturday the unrest that began at the start of the year with peaceful protests over energy price hikes had left 225 people dead, including 19 law enforcement and military personnel.

Timur Kulibayev, 55, confirmed his resignation from the Atameken business lobby in a statement posted on the group’s website.

“Dear colleagues! From today, I decided to resign as the elected Chairman of the Presidium of the National Chamber of Entrepreneurs ‘Atameken’,” Kulibayev said in the statement.

Much of the popular anger in the protests has appeared directed at Nazarbayev, who ruled for more than a quarter-century before stepping down in 2019 and handing over power to a hand-picked loyalist.

Nazarbayev has not been seen in public since the end of last year.

His successor, Kassym Jomart-Tokayev, last week for the first time openly criticised the former president, accusing his mentor of failing to share the vast national wealth with ordinary people.

He did not offer a reason for his resignation, but called on the lobby to follow the priorities outlined for business by Tokayev in his speech to lawmakers and officials last week.