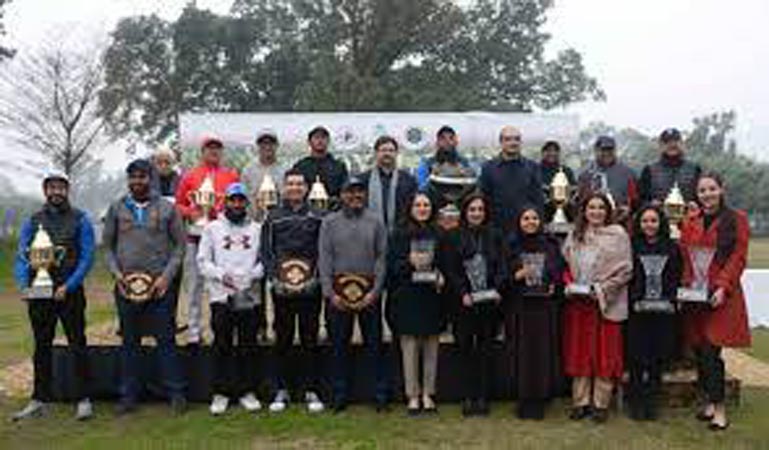 LAHORE: In the 12th Royal Palm Golf Team Championship 2022, which culminated at the Royal Palm Golf Course here Sunday after three engaging and captivating golf rounds, eventual triumph was effectuated by the four-member Karachi Golf Club team comprising of Saim Shazli, Omar Khalid, Hamza Shikoh Khan and Yashal Shah. This highly skilled and undaunted four-member combination applied their golf playing skills valorously enough during the final 18 holes on yesterday to prevail over their consummate and adroit opponents of Royal Palm team, embodying capable ones like Ahmed Zafar Hayat, Mohsen Zafar, Shahid Abbas and Hussain Hamid. All through the final round, the fight was relentless and not for a moment did one team look better than the other. For Royal Palm, Hussain Hamid excelled on every shot and by virtue of consistent pars ended the round with a score of gross 71, one under par, giving his side a lot of expectation and sanguineness. His team mate Shahid Abbas was efficacious too and played with ample maturity but Ahmed Zafar Hayat considered the masterly one played a dispirited round of gross 80 thus dampening Royal Palm’s chances. That however should not take the credit away from Karachi team’s performance as their star player Omar Khalid ably led the effort and did not relent at any stage, enabling Karachi Golf Club’s admirable and fulfilling attainment. For Karachi, their boyish seventeen-year-old Omar manifested the champions touch and his score of gross 72 was most beneficial for his side. Others who contributed to Karachi’s win were Shazli and Yashal. Both had rounds of gross 76. The match scores were 699 for Karachi and 701 for Royal Palm. The third position was secured by the Lahore Gymkhana A comprising Salman Jehangir, Qasim Ali Khan, Danish Javed and Taimoor Shabbir .Their score was 707.

The gross honours in the individual category fell in the welcoming lap of Hussain Hamid of Royal Palm, now a name to be reckoned with in the amateur ranks of national amateur golf. In the final round, he showed his ability and the pars and birdies came in regular succession with bogies too infrequent which highlighted his control over the competitive race. Hussain ended up winning the first gross with three rounds scores of 81, 75 and 71, total of 227. Omar of Karachi Golf Club came second with three rounds scores of 76, 80 and 72 and an aggregate of 228. The third position went to Muhammad Shoaib of Lahore Gymkhana and had scores of 78, 74 and 76 and his total was also 228. The fourth position went to Salman Jehangir (Lahore Gymkhana) with a total score of 230 and fifth position holder was Qasim Ali Khan. His score was 232. In the women’s competition Shahbana Waheed was the best one in the net event and grabbed the first net. Shahnaz Moeen had to be content with the second net prize while Minaa Zainab fetched the third net. In the gross section, the winner was Syeda Iman Ali Shah, Bushra Fatima was second and Tehmina Ahmed came third.