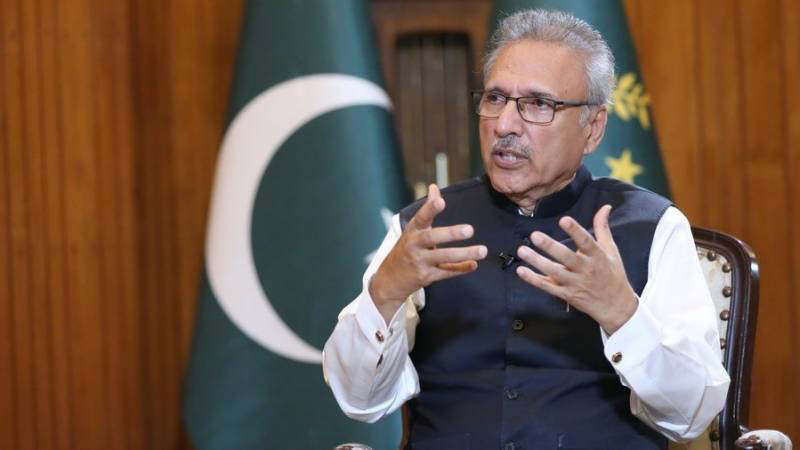 President Dr Arif Alvi Saturday said that all-weather strategic cooperative partnership between China and Pakistan envisioned a prosperous region with the establishment of economic and trade linkages through the China-Pakistan Economic Corridor (CPEC), a flagship of Chinese One Belt, One Road initiative.

During an interaction with the Chinese media, the president said Pakistan and China enjoyed excellent relations which were based upon all-weather strategic cooperative partnership. Dilating upon the long history of ties between the Iron Brothers, the president said both the countries had been cooperating in diverse fields through China Pakistan Economic Corridor (CPEC). The leadership of the both countries had been consistently improving upon the historic relationship, he said, adding the ties were based upon people-to-people linkages. President Alvi said both countries had faced testing times. The world is in the flux, facing different challenges and issues like illegal occupation of Kashmir (IIOJK) by India.

He said Pakistan and China have been continuously talking about peace in the world and pushing for a durable peace across the world. The president cited both countries’ efforts for peace and stability in Afghanistan. China and Pakistan had a long history of friendship and they were continuously improving upon these ties which had started during 50s and tremendously grew up during 60s, he added. China’s link with the world was established through Pakistan, he said. To a question, the president said that the new global order was emerging. On different issues, Pakistan and China think alike. In the face of these changes, the president stressed that any global changes should be based upon principles rather than hegemony.

The president further stressed that these changes should not be of any kind of interference in each other’s affairs. The last seventy years ties between Pakistan and China had been a good example for the world to show how countries could be friendly and forged relations based upon principles and mutual understanding, he added. About the CPEC, the president said it is unique form of cooperation. CPEC completed projects stood around worth $28 billion whereas another $24 billion projects were under the completion. The president said the entire portfolio of CPEC projects was over $62 in the short term.

“I think the CPEC has a tremendous impact upon the economy of Pakistan,” he opined. Rejecting certain propaganda launched against CEPC, he said huge cooperation was going on between China and Pakistan. He said the a very low mark-up over this investment reflected the mutual cooperation rather than exploitation as projected by those opposing the project. The president further said that under CPEC, the initial projects were energy-based as Pakistan had been facing serious shortage of energy, subsequently, in the second phase, there were huge areas of cooperation in food, health agriculture and poverty alleviation.

The president reiterated that through these multi-dimensional projects, people in Pakistan would find more job opportunities and would come out of poverty. He observed that poverty could be alleviated through the strengthening of health and education infrastructure over which Pakistan was fully focusing with different initiatives like Ehsaas programme.

To another query, he replied that China had adopted a zero-Covid policy but Pakistan handled it in a very different manner. The government in Pakistan opted for partial lockdown as its economy could not sustain complete lockdown. There were maximum 6,800 covid cases in Pakistan during the months of June and July, he added.  Highlighting the importance of Gwadar port, the president said fast progress was being achieved. It was one of the largest ports in the region close to the Gulf and would serve as a major deep-sea port. The president shared that it would link western areas of China proving as a big advantage for it.

He said Gwadar port was also strategically very important from other aspects as well including fishery. The president urged the governments of the both countries to make further efforts for ensuring movement of goods from China to Gwadar and from Gwadar to China.

Gwadar would be the shortest trade route for Afghanistan and to the Central Asian Republics (CARs), he said, adding the more linkages were established, the more progress and development would take place in the region and beyond. Gwadar port would ensure peace and development for the whole region, he expressed the confidence.

About the cooperation in IT sector, the president underlined that cyber security and the human resources were needed to be developed. He maintained that tomorrow’s world would not be based upon brick and mortar. China and Pakistan required to be firewalled against hacking, the ability of the non-state actors to launch cyberattacks; for example, to affect their banking and financial institutions and utilities as everything was available on internet, the president added.

The president said that they would be looking forward for the Chinese cooperation in developing the chips and cited development of JF-17 Thunder, a good example of cooperation between the two countries.

The president said the IT sector across the globe was witnessing an exponential growth for which the world needs trained manpower and stressed that both countries could bring their people into this sector for the economic prosperity. The president also elaborated that both countries could cooperate further in agriculture and Pakistan could learn to increase its yields with the help of Chinese expertise and technology.