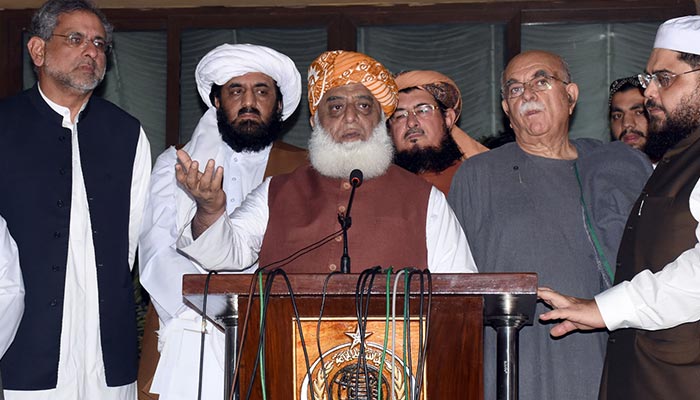 MANSEHRA: Pakistan Democratic Movement (PDM) Maulana Fazlur Rehman on Saturday said “one person’s opinion” on national matters is not enough. “The National Security Policy was being formulated, but the parliament was unaware about it,” he said, while addressing an event, a day after Prime Minister Imran Khan launched the public version of the National Security Policy. The full version will remain confidential.

The JUI-F chief said his party had a massive following, lashing out at the government for green-lighting the security policy “without any consultations”. “Politics is the only path to power,” the JUI-F chief said, adding: “The ulema have to unite for the benefit of the people.”

This is not the first time that the Opposition has critised the government over the NSP. In December, there was a ruckus in the upper house of Parliament, as senators lashed out at the government for not presenting the NSP in the Senate.

“What sort of a policy is this that the parliament did not get a chance to debate over? The parliament has not even seen this policy,” Senator Sherry Rehman said, chiding the government. The National Security Committee (NSC) on December 27, 2021, approved Pakistan’s first-ever NSP 2022-2026, and a day later, it received the federal cabinet’s nod as well.

Addressing the launching ceremony of the NSP’s public version in Islamabad yesterday, PM Imran Khan said the nation was now “headed in the right direction”. The premier said national security was defined “in the right manner” in the new policy, as Pakistan has only ever had a one-dimensional thought — “we only need military security”. The policy emphasises a geo-economic vision to supplement the focus on geostrategy and highlights that the foremost aim of Pakistan’s foreign policy and military capability is peace and stability in the region and beyond, based on mutual respect and sovereign equality, APP reported.

The formulation process included multiple consultations with official stakeholders and input from over 600 individuals, including national security experts, the state-run news agency said.

“Our national security thinking seeks to identify means of expanding economic resources such that Pakistan can simultaneously strengthen its traditional and non-traditional security,” said National Security Adviser to PM Dr Moeed Yusuf, according to APP.