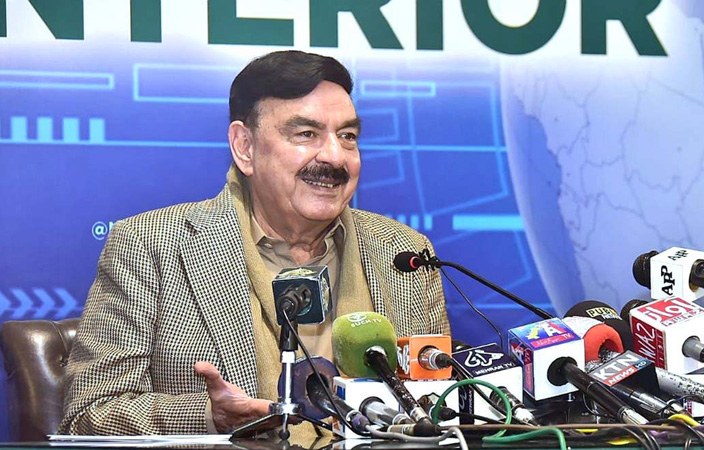 Interior Minister Sheikh Rasheed Ahmad has said that the leader of the Opposition in the National Assembly Shahbaz Sharif is “more corrupt than his brother Nawaz Sharif.” The statement came during a press conference in Islamabad as the interior minister took a jibe at the Opposition for criticising the government’s economic policies and its decision to seek assistance from the International Monetary Fund (IMF). Sheikh Rasheed said that the Nawaz Sharif family had no role in the country’s future politics, advising them to avoid the further wait for having any good opportunity. He said that no drastic change was happening in the country’s politics without Nawaz Sharif and added that all ‘four Sharifs’ were now minus and had no further role in the politics. He said that the present government of Pakistan Tehreek-e-Insaf (PTI) would complete its tenure and expressed the confidence that it will also return again for the next tenure. The minister said that opposition parties were in a state of disappointment and stress as against their wishes, the present government was successfully running the state affairs. He said that the government had already completed its three and half year tenure while the opposition need further warm-up time. Sheikh Rasheed said, “The opposition has been saying since last year that PTI is going to lose power, but it should clear any misunderstanding about the government. Prime Minister Imran Khan is so lucky to have got such incompetent and ineffective opposition.”

He said the present opposition had no vision to understand the prevailing situation and they had selected the wrong time for holding the protest. “They already lost their time and now they will get nothing but to spoil their and our time.”

Sheikh Rasheed said, “We will welcome them and not stop them or take any action against their long-march unless they hold peacefully.” He added, they are politically visionless people as there was no reason for holding two separate long-march in the country when local government elections are going to be held soon.

He said the government had to go to the International Monetary Fund (IMF) due to the weak economic policies of the past governments. “Opposition parties have looted the country’s money during their tenures without realizing the negative impacts of their wrongdoings on all sectors of the country.”

He said,” Their feeble economic plans compel us to accept this hard deal just to move the economy of the country on right track.” He expressed the hope that things would improve now and more investment would come in the country besides progress in other sectors.

He said that this year 23 March will be an important day as many important personalities of the Organization of the Islamic Cooperation (OIC) are likely to visit Pakistan. He predicted that the Chinese J-10C flying pass is also expected in the historical 23 March Pakistan Day parade.