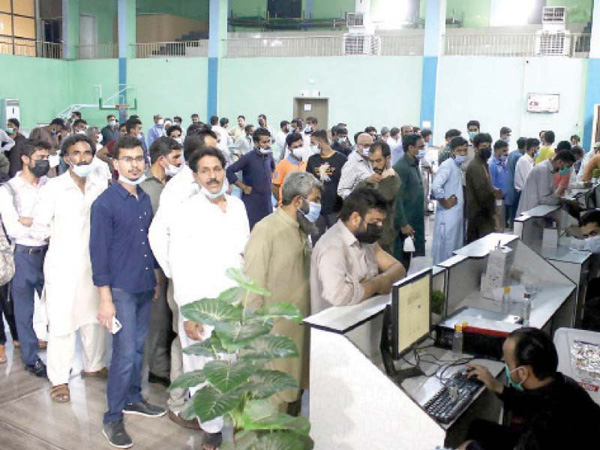 The National Command and Operation Centre announced on Friday that citizens over 18 years old will be eligible for a free anti-Covid booster dose of their choice from tomorrow onwards.

“Age limit for booster dose has been further reduced. Booster (one dose) will be administered after 6 months gap from complete vaccination,” the NOOC said in a tweet. A day earlier, Pakistan reported seven Covid-19 related deaths and 3,567 new positive cases.

According to the NCOC’s statistics, 48,449 tests were conducted and the positivity ratio reached 7.36 per cent.

Covid first emerged in the country in February 2020 and hit its peak in the summer. The cases started declining in July only to rise again towards the end of the year in the form of its second wave.

Two more Covid waves were witnessed in the first quarter and then in the second quarter of last year. The waves were driven by deadlier delta and the Indian variant of coronavirus. Now, the country is in the grip of a fifth wave fuelled by a superspreader variant, Omicron. On January 11, Planning Minister Asad Umar, who supervises the government’s anti-Covid strategy, reiterated his call on all the provinces to follow the non-pharmaceutical interventions (NPIs) and the obligatory regime in letter and spirits in order to curtail the spread of the fifth wave of Covid-19.

Umar, the head of the NCOC, told the ceremony that the people who had not been vaccinated so far must get the shots as soon as possible, while those fully vaccinated six months ago, should go for a booster doze. Pakistan’s coronavirus positivity ratio jumped over 7% as the country reported 3,567 new cases – the highest since September 10, 2021 – in the last 24 hours, the National Command and Operation Centre’s (NCOC) data showed Friday morning.

Amid rising coronavirus cases in the country after the emergence of the Omicron variant, a meeting of the education ministers’ was called yesterday (Thursday) to decide the fate of schools, but was later postponed to next week.

Karachi’s coronavirus positivity ratio reached 28.80% in the last 24 hours, according to NCOC’s data released this morning – slightly lower than 31%, which was recorded on Thursday when 1,940 people were testing positive for the infectious disease, Chief Minister Sindh Murad Ali Shah said Friday the decision to impose a lockdown and close educational institutions will be taken in line with the NCOC recommendations.

CM Shah, speaking to journalists in Karachi, said coronavirus cases were spreading at a rapid pace, but the situation was under control as hospitalisations and patients in intensive care units (ICU) in the port city were less. The Sindh CM highlighted that Karachi reported its highest number of COVID-19 cases a day earlier, but insisted that the pressure on hospitals is not increasing. “Whatever strategy we adopt, it will be in consultation with NCOC,” he reiterated.