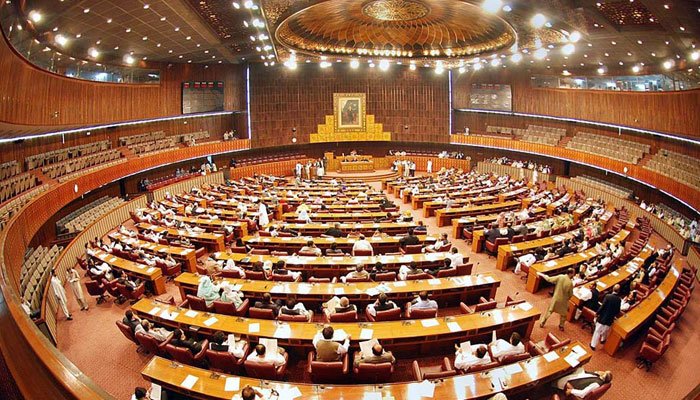 ISLAMABAD: Minister of State for Parliamentary Affairs Ali Muhammad Khan on Friday said it was the prime responsibility of the elected representatives to strengthen the democratic norms and ensure the sanctity of the Parliament.

Speaking on floor of the National Assembly, he criticized opposition parties’ attitude exhibited in the House the other day and said chair of the NA Speaker must be given the due respect. “Protest is the right of opposition parties but it should be in a respectable way.”

He said hurling papers on the chair of Speaker National Assembly was regrettable, as the government was ready to listen to the protest of the opposition parties with open heart.

Responding to a question of Shazia Marri, the minister said the honorarium announced by the finance minister would be ensured to the employees who performed duties during the budget session.

The minister said he had discussed with the finance minister to include the staffers of Press Information Department (PID) and Radio Pakistan in the honorarium list.

Khawaja Muhammad Asif of Pakistan Muslim League-Nawaz (PML-N) said that it was up to the members of the House to ensure the respect of the chair.

He was of the view that the treasury bench’s attitude was inappropriate whey it get passed bills from the House the other day.

Pakistan Tehreek-e-Insaf (PTI) MNA Amjad Ali Khan said the State Bank of Pakistan (Amendment) Bill 2022 was tabled in the House after the consultation of all political parties. He said in the committee meeting, the political parties had given their input for the proposed legislation.

He said it was the stance of the PTI to give independence to state institutions.

He said the prime minister would nominate the SBP Board members.

He asked the federal government to hand over the security of the Sindh province to the Rangers for improved law and order.