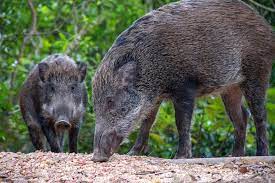 PESHAWAR: The Wildlife Department of Khyber-Pakhtunkhwa has taken notice of reports about sighting of wild boars in a suburban locality of Peshawar and sent teams for verification and trapping the animals.

DFO Wildlife Peshawar Muhammad Niaz said that they had sent teams soon after receiving reports about the sighting of wild boars near a graveyard of Palosi area.

“In the video wild boars were seen roaming in a dump of solid waste,” he said. He said locals apprised them that a sounder of wild boars was found near the graveyard area which is very unique for them.

Marks along with some burrows dug by these animals were also found at the site by locals, he mentioned.

After taking locals into confidence, the Wildlife Department officials decided to keep baits and snares for capturing animals.

Local Nazim was also approached to ask the public not to let their livestock at the site after sunset to avoid being trapped in the snare. However, he said, no animal was caught in the snare fixed by Wildlife Department which were later removed for safety purposes. Niaz said people were also informed to take measures for the removal of solid waste which attracted the animal and were asked to put some barricades to discourage animals.