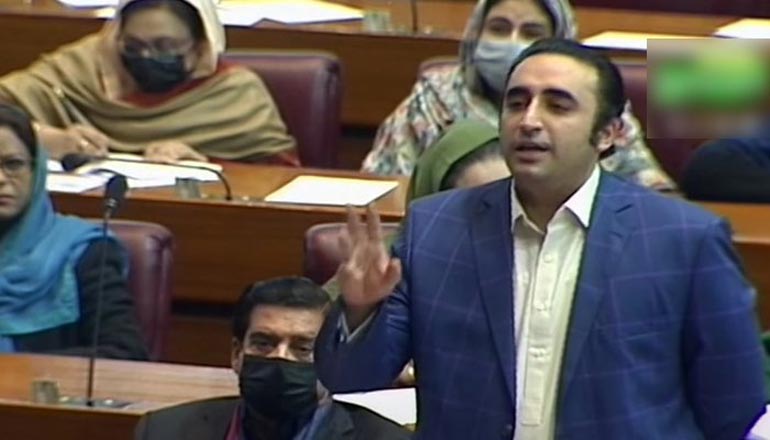 PPP Chairman Bilawal Bhutto Zardari says a crisis hits the world every decade and Pakistan’s crisis in the current decade is Prime Minister Imran Khan. Speaking in the National Assembly on the Finance Bill 2021, Bilawal said the government’s deal with the International Monetary Fund (IMF) would have devastating effects on the nation. “You went to the IMF when you were weak […] and you made a weak deal with the IMF. We will not bear the burden of the deal. The common man and poor people will bear its burden,” he said. Bilawal said the country will face an ‘inflation tsunami’ if the government passed the Finance Bill 2021, which the opposition refers to as the “mini-budget”.

The government is seeking to pass the Finance Bill 2021 and SBP Amendment Bill, as it is a pre-requisite to resume the $6 billion External Fund Facility (EFF) of the IMF. Bilawal said the government’s “arrogance” came in the way of it holding talks with the opposition on its deal with the IMF, says a news report. “We asked you to consult with Asif Ali Zardari and Shehbaz Sharif, but you rejected the proposal.” After passing the “mini-budget”, you will not be able to set foot in your constituencies, Bilawal told the treasury benches, adding that a trailer of it was witnessed during the Khyber Pakhtunkhwa local bodies polls where JUI emerged victorious in the first phase.

“The incumbent government’s lawmakers cannot face their voters in their constituencies […] you will soon be under the people’s wrath,” he said. During the 2018 general election campaign, Imran Khan had vowed that he would go to the Prime Minister’s Office on a bicycle, but he went there by a helicopter, Bilawal said.

“You aren’t just taxing imported items, but you are also imposing taxes on locally manufactured goods. The government is taxing eggs, poultry, and seeds – this is the economic murder of farmers.” The PPP chairman said the government was imposing 17% tax on agricultural goods and foreign aids.

“We have seen enmity with the poor and the people, but this government is the state’s enemy.” Bilawal said “confusion” over the economic policy prevails, which would ultimately lead to the “death” of the country’s economy. He pointed out that in the early days the government claimed that it would not seek assistance from the IMF. “The government [has since then] made wrong decisions of putting burden on the people.” The PPP chairman said Pakistan had never witnessed such bad economic growth as it had during the PTI’s tenure. “Even when we split into two countries – Pakistan and Bangladesh – our GPD growth was still not negative.”