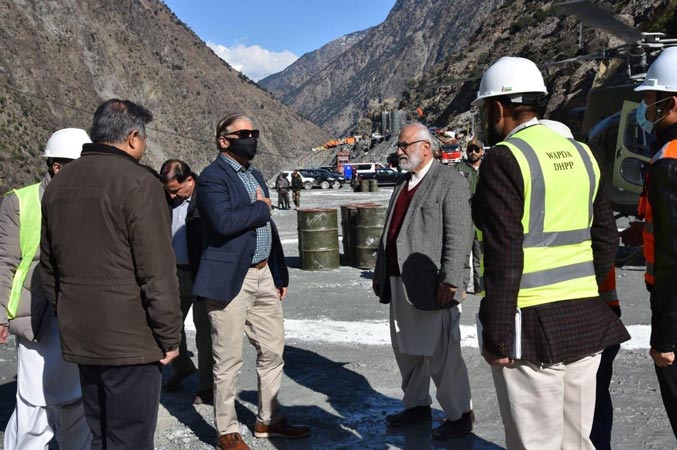 WAPDA General Manager Dasu Hydropower Project Anwar-ul-Haq and representatives of the Consultants and the Contractor were also present on the occasion.

The Chairman had a round of the various components of the project and witnessed the construction activities going on there.

WAPDA Chairman said that Dasu Hydropower Project is of immense importance for a quantum increase in green and low-cost hydel electricity in the National Grid, therefore the project authorities must ensure achieving major construction milestones in accordance with the timelines set for the purpose. He directed the management to double their efforts for completion of the project in accordance with the stipulated time and construction standards.

Earlier, the Chairman was briefed about the progress on the project. It was apprised that the construction work is underway simultaneously on as many as eight sites which include diversion tunnels, underground powerhouse, flushing and traffic tunnel, Relocation of Karakoram Highway, right bank access roads, 132 KV transmission line, WAPDA colony and offices.

It is worth mentioning that the 4320 MW-Dasu Hydropower Project is being implemented in two stages. At present, WAPDA is working on 2160 MW-Stage-I, which will provide 12 billion green and low-cost electricity to the National Grid annually while the Stage-II will also contribute another 9 billion units to the system per annum.