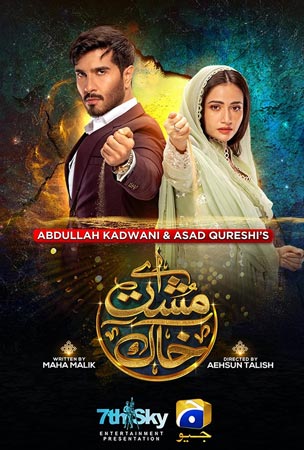 Pakistani TV soaps have been historically well-received in the subcontinent. But a scene from Geo Entertainment’s Aye Musht-e-Khaak has left even Pakistanis scratching their heads-it is all over a honeymoon talk. Pakistanis are crying emojis on Twitter.

In the scene that has also become a butt of joke for many on the microblogging site, a husband is seen convincing his wife to travel to the US for honeymoon. But the wife refuses citing studies and Ramzan. According to Dua, played by Sana Javed, honeymoon is forbidden during the holy month of Ramzan. She tries to explain her husband, who barely understands religion, how Roza is very important to her. The awkward conversation ends abruptly when Dua walks out. The scene has garnered attention of even those Pakistanis who haven’t seen the show.

As has been the case before, PEMRA or the Pakistan Electronic Media Regulatory Authority, also came under attack. A Twitter handle by the name of Mona Alam wrote: “After PEMRA’s mindless notification of banning intimate scenes, here’s how Romance is shown in our dramas. Which is far more uncomfortable to watch with Family rather than an innocent hugging gesture”. PEMRA had banned hug scenes in October last year.

Another user said she “can’t breathe”, posting crying emojis next to the now controversial clip from the serial.

There were also those who came down heavily on the quality of shows Geo Entertainment was airing. A user wrote: “Geo will make dramas this awful and then promote them like no tomorrow but would literally give zero attention to dramas like Alif and Jo Bichar Gaye, clearly showing why geo is and will remain the worst channel of all time.” They expressed their anger for Geo to have undermined other shows.

Though it was supposed to be a very serious scene, many users found it “hilarious”. Others thought there was a need to “sanitize” their ears after watching and hearing the scene.

A handle by the name of Imman expressed shock over the absence of censorship and how the scene was “aired” in the first place. To this, a user replied: “Welcome to the Pakistani drama industry.” Another user named ‘rabab’, while mocking the scene from Musht-e-Khaak, wrote: “my remaining three braincells are rolling back and forth like a drum that has fallen off a truck after watching this.”