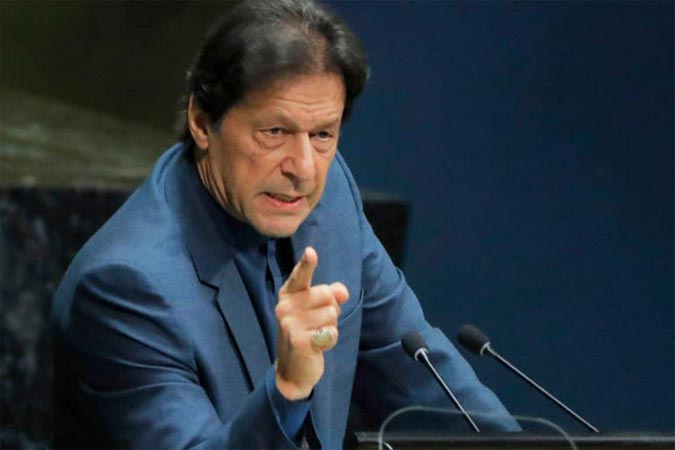 Prime Minister Imran Khan on Monday said that the ruling party has presented its funding receipts to the Election Commission of Pakistan (ECP) and that the “scrutiny committee has cleared the party of all suspicions.”

“All other political parties should provide the receipts of their funding too,” the premier demanded at a meeting of PTI’s spokespersons, a private TV channel reported. He further said that out of total funding of Rs 310 million, an amount of Rs150 was shown twice. “This [error] will be cleared in the next hearing of the ECP,” PM Khan said.

Talking about the electronic method of transferring funds (TTs) for overseas wire transactions, the prime minister said, “Isn’t Shahbaz Sharif ashamed of himself since he used too many TTs to launder money?”

The premier talked about the foreign funding received by other parties and said that the “PML-N should give an account of the billions of rupees of funding it received from overseas sources.”

Meanwhile, Prime Minister Imran Khan said the extremist agenda of Indian government of Narendra Modi was a ‘real and present threat’ to peace in the region and urged the international community to take note of the targeting of religious minorities in India.

“It is high time that international community took note. Acted under the extremist ideology of the BJP Modi government, all religious minorities in India have been targeted with impunity by Hindutva groups,” he tweeted.

The prime minister also pointed out that the silence of Modi government over the call of Muslim genocide by extremist Hindutva leaders put a question on its support to the call.

“The continuing silence of Modi government on the call at an extremist Hindutva summit in December for genocide of minorities in India, especially the 200 million Muslim community, begs the question whether the BJP government supports this call,” he said.

The premier said the Modi-led government’s silence, despite calls for genocide, begged the question whether the BJP govt supports this call.

The prime minister said that under the extremist ideology of the BJP Modi government, Hindutva groups have targeted all religious minorities in India.

“The extremist agenda of the Modi government is a real and present threat to peace in our region,” PM Imran Khan said. As the premier tweeted, the Supreme Court of India decided to take up a case related to the hate speeches, including open calls for genocide made at the conclave, NDTV reported.

“We will take up the matter,” Chief Justice of India NV Ramana said, as quoted by the media outlet.

According to Time of India, as many as 200,000 Muslims gathered in the Bareilly city last week and offered themselves for what they called “mass sacrifice” in protest against the hate speeches.

Pakistan, on December 27, deplored Hindutva leaders’ calls for Muslim genocide in India and lamented New Delhi’s inaction over the matter.

To express Pakistan’s serious concerns over the calls for Muslim genocide, the Indian charge d’affaires was summoned to the Ministry of Foreign Affairs, Islamabad.

In a statement, the Foreign Office said it was highly reprehensible that Hindu Raksha Sena’s Prabodhan and Giri and other Hindutva figures who called for ethnic cleansing of Muslims have neither expressed any regret nor has the Indian government condemned or taken any action against them so far.