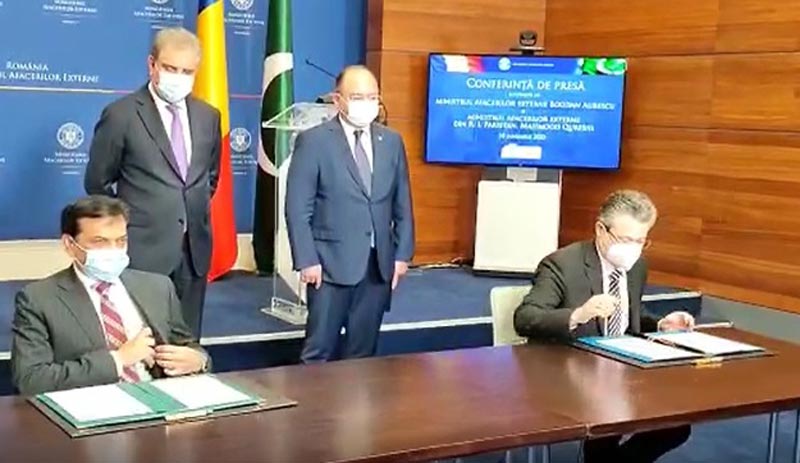 Addressing a joint press conference with his Romanian counterpart Bogdan Aurescu, the foreign minister said a huge potential existed for the Romanian investors in not only promoting the bilateral trade ties but also from the prospects of Pakistan being a hub of exports to Central Asia as the new markets were now being opened up for the world. Pakistan, he said, was building an economic corridor with China, and the construction of Gwadar Port would open the world to the landlocked Central Asian Republics and Afghanistan.

Qureshi said during his meetings with the Romanian leadership, measures to promote the economic relations were discussed.

He said great opportunities existed between the two countries to further develop understanding as it was the right time to move ahead.

According to the Romanian counterpart, he added, the bilateral trade between the two countries increased by around 50.6 per cent during the last fiscal year despite the COVID challenge. However, it was not near the real potential in the context of their bilateral ties and the trade opportunities with the European Union, he observed.

The foreign minister said Pakistan was at the advantageous position. With GSP+ status, they felt that it had been mutually beneficial for both the EU and Pakistan.

Referring to signing of an agreement between the chambers of two countries, Qureshi said it would open new avenues for the corporate and private sectors. The private sector had been and would be a driving force in growing the bilateral trade ties between Pakistan and Romania.

The foreign minister said Pakistan and Romania enjoyed excellent diplomatic ties spanning over 58 years and had been supporting each other at multilateral levels.

“I want to acknowledge that besides excellent bilateral relations and goodwill to each other, our exchanges are frequent. I am here with a very determined view to initiate a new era in our bilateral ties,” he said expressing the optimism that his visit would set a new tone for the new era of bilateral relations.

He said he also shared with the Romanian side, the delicate situation on the eastern side of Pakistan, in the Indian Illegally Occupied Jammu and Kashmir, adding the members of European Parliament (MEPs) had also spoken about it.

The foreign minister also expressed his confidence that the educational agreement would benefit Pakistani students.

He also thanked the Romanian government and its people on behalf of the prime minister and people of Pakistan for generously donating 5,000 doses of coronavirus to Pakistan.

On his arrival at the PM Office, Foreign Minister Qureshi was received by the Romanian Chief of Protocol.

The foreign minister conveyed good wishes from Prime Minister Imran Khan and highlighted the historic and cordial ties between the two countries.

He told the Romanian PM that Pakistan desired to establish broad-based and result-oriented ties with his country and the current improvement of the bilateral relations manifested the vision of the two leaderships.

The foreign minister lauded the anti-COVID measures by Romania and thanked the Romanian PM for a donation of 500,000 doses of anti-COVID vaccines to Pakistan by his government. Prime Minister Nicolae Ciuca appreciated the role of Pakistan in the context of Afghanistan particularly for the evacuation of the Romanian citizens. Discussing the regional and international matters, the foreign minister particularly highlighted the Indian human rights abuses in Indian Illegally Occupied Jammu and Kashmir and the situation in Afghanistan. He also appreciated Romania’s role to support Pakistan in obtaining the GSP Plus facility.