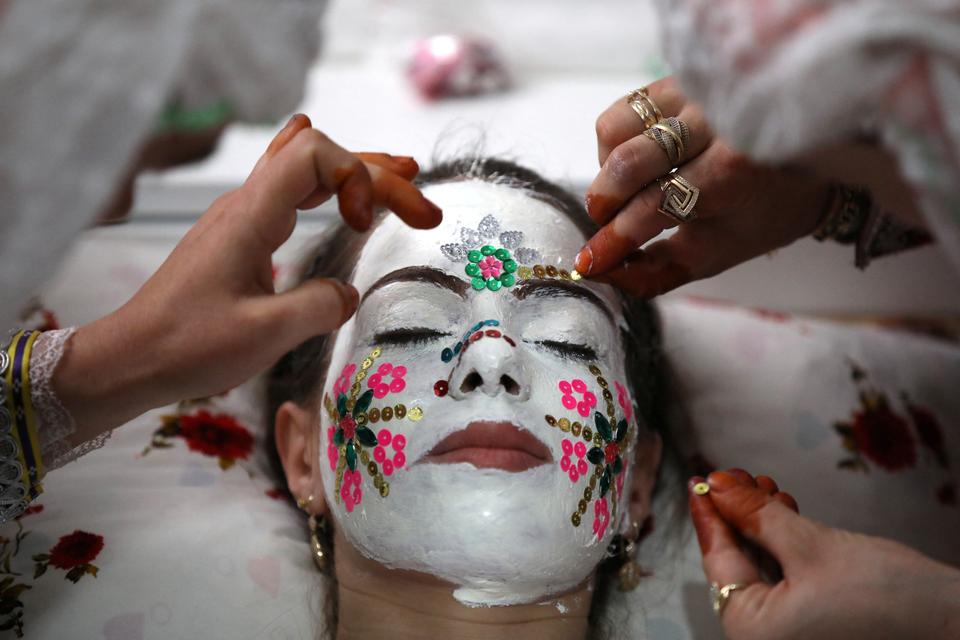 The marriage of Nefie Eminkova, 21, and her fiance Schaban Kiselov, 24, is an extravaganza of bright colours, flowers, feasting, and dancing.

But the bride, who comes from Bulgaria’s Pomak minority, can see none of it. Her eyes must remain tightly closed until a Muslim priest blesses the couple. The pair are following an age-old traditional winter wedding rite that their tiny community nestled in the southern Rhodope mountains was forced to abandon during communism but has revived since the fall of the regime in 1989.

The ritual spans two whole days, starting with a lavish display of the bride’s dowry. It comprises “everything you can think of” that a new family might need, Nefie explains. Handmade socks, crocheted baby blankets, and bedding are hung out on wooden scaffolding in the street, next to a fully-made marriage bed and a television set.

The culmination of the wedding comes at the end of the second day with the “gelina” — the painting of the bride’s face. In private and away from prying male eyes, two older women relatives cover Nefie’s face with a thick layer of white face paint and then decorate it with multicoloured sequins.

They cover her hair with a red headscarf and frame her painted doll-like face with silk flower garlands and streaks of shiny tinsel, making her unrecognisable. She is then presented to her husband-to-be clad in traditional attire of dark crimson baggy pants, multicoloured apron, and bodice, and henna-painted fingertips contrasting with his simple blue jeans and black blazer.

Nefie holds up a hand mirror and secretly takes a peek at her face. She will be allоwed to open her eyes wide only after the imam blesses the new couple and her husband washes her face with milk in their new home. Plenty of food and dancing to music from zurnas and drums ensures the success of the marriage festivities but there is no alcohol.

“That’s the way people here get married and we also like to have it this way,” Nefie tells AFP before the “gelina” face painting. Nefie and Schaban will leave Ribnovo, a mountainous village of around 3,000 inhabitants, in the spring for Germany, where the young man has a small flooring business.

Like many other Bulgarians, he was forced abroad in search of work and a better income and has only returned briefly for the wedding. “My parents did not have a chance to have such a wedding and I decided to do it the old way in order to make them happy, they look even happier than we are,” Schaban says.

Bulgaria’s communist regime from after World War II until 1989 was especially hostile to the country’s sizeable Muslim minority. The Pomaks — Slavs converted to Islam during Ottoman rule — were particularly oppressed and forced to abandon their colourful attire as well as their wedding and circumcision rites during the 1970s.

There are around 200,000 Pomaks living in Bulgaria today but only Ribnovo and one other southern village maintain the old wedding rites. This is thanks to Ribnovo’s geographical isolation and the “capsulation” of its community, Ethnology Professor Evgenia Ivanova explains. And while only a handful of weddings are held every winter in Ribnovo, the same Muslim ritual is also observed in Bulgaria’s southeastern neighbour Turkey.