* Photographer Paolo Rovers shot the photos at Kew Gardens in London last November and they will enter the permanent collection of the National Portrait Gallery, of which Kate is Patron 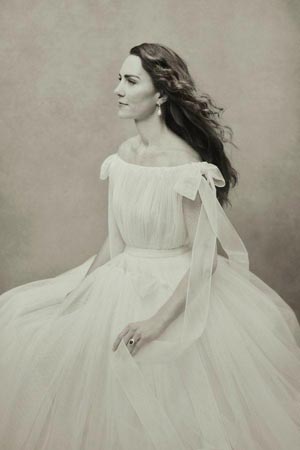 Forty and fabulous! In honor of Kate Middleton’s 40th birthday this Sunday, Jan. 10, Kensington Palace has released three new portraits of the Duchess of Cambridge looking regal and more radiant than ever in three different Alexander McQueen dresses.
Photographer Paolo Rovers shot the photos at Kew Gardens in London last November and they will enter the permanent collection of the National Portrait Gallery, of which Kate is Patron.
In one picture, Prince William’s wife and mother of Prince George, 8, Princess Charlotte, 6 and Prince Louis, 3, wears a one-shoulder, ruffled red dress with pockets and diamond earrings from Queen Elizabeth II’s collection. In another photo, Kate sports a white ruffled dress and diamond and pearl drop earrings that belonged to the late Princess Diana. A third image shows her wearing an off-the-shoulder white dress with side ties. In all three pics, the duchess’ hair is styled in breezy waves.
“Taking the portrait of Her Royal Highness the Duchess of Cambridge was a true honor for me and a moment of pure joy,” the photographer said, according to multiple outlets. “I was moved by her warmth and friendly welcome and enchanted by her shining eyes that reflected the loveliness of her soul and her smile showing the generosity of her heart.”
He added, “It was a profound and rich experience for me, an unforgettable moment. I have met a wonderful person, a person who, with her positive energy, can bring hope to the whole world.”
“Thrilled to welcome the new portraits into our Collection!” read an Instagram comment from the National Gallery.
Kate’s new portraits were released a month after she wowed audiences at her first public musical performance as a royal. The duchess performed piano onstage with Scottish singer Tom Walker at the Royal Carols: Together at Christmas that was broadcast on Christmas Eve.
“Without doubt, it was a once-in-a-lifetime experience,” Walker said of their duet, per ITV, which aired the event. “I thought she absolutely smashed the performance; it’s not easy to just jump behind a piano with a bunch of musicians you’ve never played with before and record live takes to camera, but she completely nailed it.”
Earlier in December, Kate and William released a Christmas card showing them and their kids during a trip to Jordan that they took earlier in 2021.
The duchess will reportedly celebrate her 40th birthday in private with her family at their home in Norfolk, England.