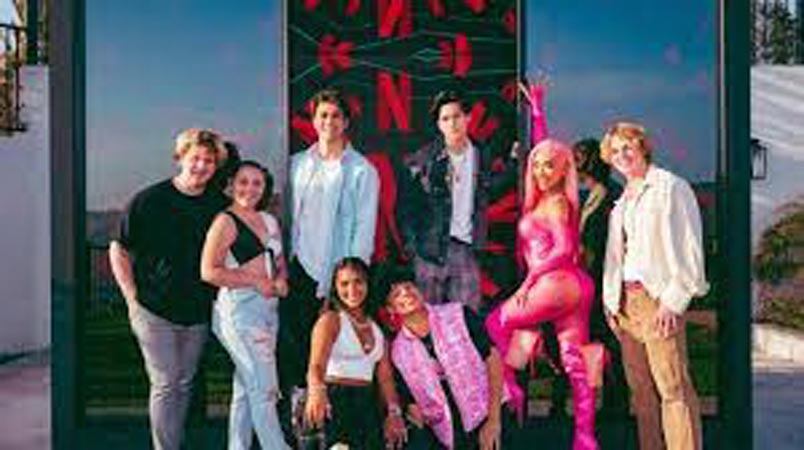 “Hype House,” a new reality soap series on Netflix, opens with a very fair question. “My whole goal with this house in the first place,” states Thomas Petrou, “was, why can’t people who hit millions of other people be as famous as A-list celebrities?”

The house in question is one shared by TikTok stars, whose work and whose interpersonal conflicts make up the storyline of “Hype House.” These young people reside in a Los Angeles-area mansion that become notorious via New York Times reporting by Taylor Lorenz. Whereas in the old “Real World” mansion, simply living in an extravagantly emotional way was the job, this reality show features people in an endless work-from-home cycle. They use the house to create content – video clips measured by the attention they elicit. And, while Petrou’s work strikes this viewer as a dog whistle only those deeply attuned to the world of TikTok can hear, it’s fair to note its impact. Viewed in a strict mathematical sense, he and his peers could be argued to be as famous as Jennifer Lawrence or Tom Hanks or take-your-pick. Certainly, unlike A-listers whose star quality has an ineffable effect, this crowd can catalyze action from a quantifiable fan base with every move.

But, unlike Lawrence, Hanks and their peers, TikTok stars would seem to lack that in-between level of awareness: Many people who have not seen “Don’t Look Up” literally know who Lawrence is, whereas to not follow Petrou is quite possibly to be unaware he exists, or that he is working daily to please his massive viewership. This makes “Hype House” very likely an introduction to a class of celebrities for some segment of the audience, though it’s hard to imagine who among the uninitiated will keep going once certain unhappy central facts of “Hype House” become clear. The series, with no small effort, establishes that the niche it depicts consists of very well-known people. It also makes clear how hard it is to convert one sort of fame to another. The cast members’ work is their lives, and vice versa, but they lack the ability to perform for a screen that isn’t on a smartphone, for a length of time greater than sixty seconds.

Though Petrou introduces us to the world of “Hype House,” its star is Chase Hudson, a brooding would-be recording artist whose breakup with prominent TikToker Charli D’Amelio, and whose subsequent striking out on his own outside the house, gives this show its first taste of conflict. Chase is a self-styled James Dean for the digital age, with aggressively floppy hair and a mien of muted rebellion. His interests seem, in the telling of “Hype House,” to be limited to fame. We see little of what he does, but we are given to understand that it’s working for some millions.

Chase’s relationship with his reputation is complicated: He’s spent much of a young life chasing his dream, but acknowledges that this pursuit has also ruined him. Noting that he’s grown bitter and closed-off after rumors flew around his breakup, he mirthlessly tells the camera, “Thanks for that, internet,” with a long pause between the last two words as he seeks a word for the thing that’s done him wrong. The internet is the engine of all the good in his life, as well as all the bad. It’s a force with a will Chase can harness but not quite control.

But the internet itself doesn’t have a mind of its own: It is controlled by the millions of users who work together to elevate some voices and drown out others. The people of “Hype House” understand, to a fundamental dollars-and-cents level, the power of the internet’s collective will. They are cautious about the perceived threat of alienating their fans, with a lengthy aside in which various personalities describe to the camera what they call cancel culture. One tells us “you’re subjecting yourself to literal harm” by being a public person; the next person to speak notes that, if cancelled, you might lose followers and brand deals. This presages a sequence in which one TikToker gets mad at another for allegedly showing up at a party while knowingly COVID-positive; the reason this is bad, we’re told, is that members of the Hype House might suffer reputational damage.

And that is a real thing anyone might be concerned about! And a viewer will be sensitive to the fact that, no matter what these individuals do for a living, they are human beings who are put through a wringer the likes of which has never before existed in human history. But perspective, here, has been erased: For members of the Hype House, popularity is where the story begins and ends. That lack of imagination about a world beyond the iPhone screen extends to the show’s aesthetic. This show is unlike the best of reality TV. It is drably shot and does little work to introduce its characters to the uninitiated. But its most crucial difference from a Netflix sensation like “Selling Sunset” is its inability to find a pretense around which to build its characters’ quest. On that superlative show, the TV stars are realtors, which lends structure and ballast to their endless playing for camera time. Here, the would-be TV stars are … professional screen performers.

That fact destroys any possible subtext or narrative richness that might have been available. It also invites us to scrutinize their work, and anyone from outside the TikTok ecosystem will inevitably find it lacking. The way this group has gotten ahead on social media is a certain calculated ante-upping that leaves little room for real quirk. The market-testing of social media has resulted in an art form that cannot possibly appeal beyond a low common denominator. In one group scene, for instance, D’Amelio – near the center of a second streaming TV show, after Hulu’s “The D’Amelio Show” – retweets a fellow TikToker who posted, in a mirthless joke, that he just defecated in his pants.