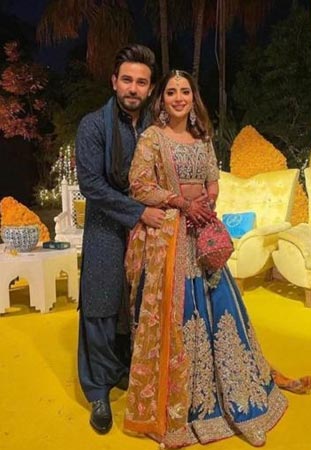 The newly wedded couple recently held a fun night, shendi event – a combination of shaadi and mehndi event and enjoyed with their showbiz industry friends and family members.

Pictures and videos form the fun event took the internet by storm, as fans can’t stop gushing over the beautiful couple.

A number of prominent celebrities including Aiman Khan, Minal Khan, Mansha Pasha, Ahsan Mohsin Ikram and others were among the attendees.

Saboor and Ali arrived at the event with an electrifying performance on Punjabi bhangra music. The new bride opted for a heavily embellished blue lehenga for the event. The groom look dapper as he was dressed in traditional blue shalwar kameez at the ceremony.