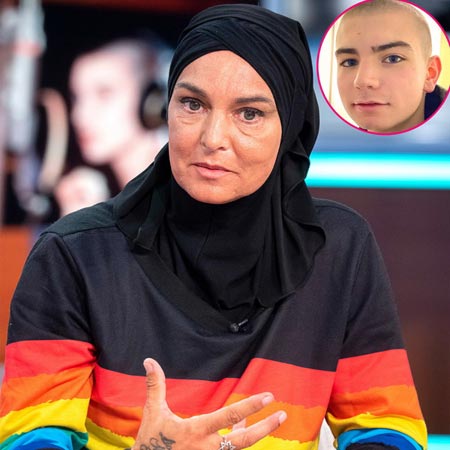 Sinéad O’Connor is mourning the death of her 17-year-old son, Shane, who died after being reported missing following his admission to an Irish hospital.

The “Nothing Compares 2 U” singer announced the passing of the teenager, the second youngest of her four children, on Twitter, adding that he was recently on suicide watch. The cause of his death was not disclosed.

“My beautiful son, Nevi’im Nesta Ali Shane O’Connor, the very light of my life, decided to end his earthly struggle today and is now with God,” Sinéad wrote on Friday, Jan 7. “May he rest in peace and may no one follow his example. My baby. I love you so much. Please be at peace.”

Dublin police had said that the singer’s son was last seen in the city on Thursday, Jan. 6. On Saturday, Jan. 8, they confirmed his death, saying in a statement to DublinLive and other outlets, “Following the recovery of a body in the Bray area of Wicklow on Friday, 7th January 2022, a Missing Person Appeal in respect of Shane O’Connor, 17 years, has been stood down.”

Sinéad, who has herself struggled with her own mental health battles in the past, said on Twitter that the police informed her about the Shane’s death.

On Jan. 6, the 55-year-old musician tweeted a plea to the boy. This is a message for my son, Shane,” she said, attaching a photo of the teen. “Shane, it’s not funny any more all this going missing. You are scaring the crap out of me. Could you please do the right thing and present yourself at a Gardai station. If you are with Shane please call the Gardai for his safety.”

Sinéad later wrote, “Shane, your life is precious. God didn’t chisel that beautiful smile on your beautiful face for nothing. My world would collapse without you. You are my heart. Please don’t stop it from beating. Please don’t harm yourself. Go to the Gardai and let’s get you to hospital.”

The singer then accused a Dublin medical center of having its healthcare assistants let Shane “out of their grasp” “when 7 days ago he made two severe suicide attempts.” She added, “Like, how has a seventeen year old traumatised young person WHO WAS ON SUICIDE WATCH…been able to go missing???” The hospital has not commented.

In 2019, Sinéad tweeted that Shane, then 14, had also gone missing “a lot” and urged her followers to help her find him. Police ultimately located him. In February 2021, Sinéad posted on Twitter, “Any spare prayers out there, pls stick one in for my son, Shane. The very light of my life.”

The teen’s father is the rocker’s former partner and fellow musician Donal Lunny. Sinéad is also a mother to sons Jake Reynolds, 34, and Yeshua Bonadio, 15, and daughter Roisin Waters, 25. Following Shane’s death, Sinéad dedicated the YouTube video of Bob Marley’s 1979 song “Ride Natty, Ride” to Shane. “This is for my Shaney,” she wrote. “The light of my life. The lamp of my soul. My blue-eye baby. You will always be my light. We will always be together. No boundary can separate us.”