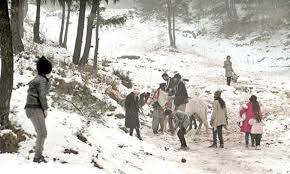 ABBOTTABAD: Hotels in the Galyat region have offered free lodging to tourists caught in Murree, where at least 19 people have died as a result of constant snowfall and road closures.

The Nathia Gali Hotels Association made the declaration, stating that they would not charge money to tourists caught in the snow.

We will provide food and other services to the trapped tourists in addition to providing housing, according to the president of the hotels’ association.

It is pertinent to mention here that Interior Minister Sheikh Rasheed has announced to summon armed forces to evacuate tourists from Murree after at least 19 people have died at the tourist spot owing to continuous snowfall and closure of roads.

“There is a huge influx of tourists in Murree and Galyat areas and the administration despite multiple attempts remained unsuccessful in clearing the roads,” the interior minister said.

He further announced that civil and armed forces have been summoned to evacuate the tourists from Murree. “We have summoned five platoons of foot soldiers of Pakistan Army and also summoned FC and Rangers to clear the roads,” Sheikh Rasheed said.

He said that currently 1000 vehicles are being trapped on the roads leading to the tourist spot.

The interior minister further shared that only vehicles carrying relief goods and warm clothes are being allowed to go to Murree while efforts are also underway to shift trapped tourists to safe locations after some vehicles have been rescued while others were sent back by the authorities.

“Those traveling on foot are also not allowed to travel to Murree,” he said and added that it was for the first time in 20 years that a large number of people traveled to the tourist spot, causing a crisis.