In Karachi, four family members injured in a gas explosion 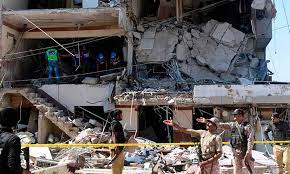 KARACHI: In an explosion caused by gas leaking in Karachi’s SITE Area neighbourhood, at least four members of a family were burned.

According to officials, the event took place within the Mominabad police station’s jurisdiction, when a gas explosion ripped the roof off a house in the Metroville neighbourhood, injuring four persons.

“The injured included a family comprising a man and a woman and two children,” they said adding the explosion caused damage to the parts of the house besides also resulting in the collapse of the boundary wall.

The injured have been shifted to a hospital for treatment as police said that they were investigating the cause of the explosion.

Recently, at least three people were injured and multiple shops were being destroyed in yet another explosion in the city apparently caused by accumulated gas in a sewer in the Mehmoodabad area of Karachi.

According to rescue sources, they have so far shifted three injured to the hospital and they have been identified as Bilal, Dilawar, and an unknown man.

The gas blast also wrecked other shops, according to SSP East, which confirmed that the blast was caused by stored gas in the sewer.

“The SSGC gas line and the accumulation of gases in the sewer generated a joint action culminating in the blast,” Qamar Raza Jaskani said, adding that the explosion did not result in large-scale destruction.