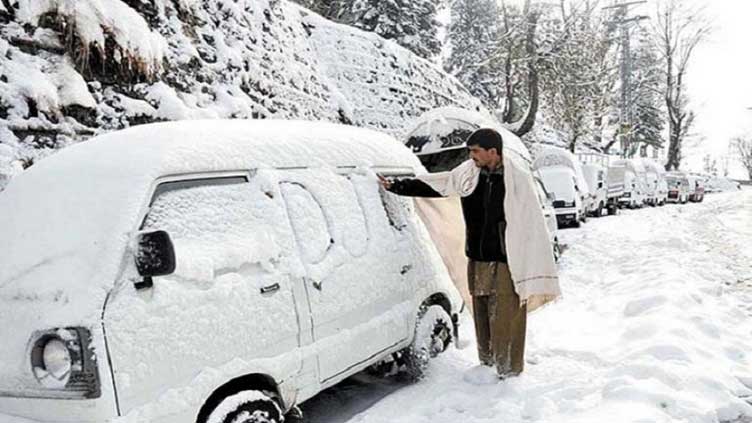 ISLAMABAD: Minister for Interior, Sheikh Rashid Ahmed on Friday said that tourists moving to Murree and Galiyat have been stopped temporarily due to massive traffic jam there.

Heavy snowfall was reported in Galiyat as Nathiagali and the suburbs received almost two to three feet of snowfall. The town had a parking capacity of nearly 35,000 vehicles while over 155,000 vehicles had entered Murree during the last five days while nearly 135,000 went out.

The AC Murree informed that over 30,000 vehicles entered the hill station on Friday alone.

In a statement, Minister for Interior said that tourists will not be allowed to move further from Satrameel Interchange, except in any emergency like situation, he added.

He said that due to heavy traffic and presence of a large number of tourists, the traffic movement towards Murree was very slow.

A large number of tourists from all across the country, especially from Punjab, are visiting the snow capped hills of Murree, Galiyat and adjoining areas to enjoy snowfall. There were slippery roads and traffic jams in some areas.

However, the Highway Department and administration of Murree remained active to clear the roads but traffic mess was seen in many areas.

As the tourists’ influx remained unprecedented, the business activities were increased manifold. Following snowfall in the Murree and surrounding areas, the Rawalpindi City Traffic Police (CTP) had issued an advisory for the visitors heading to the hill station on the special traffic arrangements made. Several points had been designated for car parking.

A number of main roads including Kashmir Point, Mall Road, Guldana Road and other roads had been closed for two-way traffic to ease traffic flow.Assistant Commissioner, Murree urged the tourists to follow traffic rules to avoid traffic congestion. He said that new travel advisory had been issued for the tourists as snowfall brought a large number of tourists to Murree. The tourists could contact control room on 051-9269016, Assistant Commissioner office on 0321-3219221 and Deputy Superintendent of Police, Murree on 0321-5615668 to get information.

Traffic Police helpline 051-9269200 could also be used in emergency, he added.The intermittent snowfall had attracted a large number of tourists to the area.

The tourists had been advised to keep the air pressure in their vehicle’s tyres low and avoid stopping their cars in the middle of the road for capturing selfies and photos. He said though the snow blanket made the “Queen of Mountains” even more beautiful, which attracted a large number of tourists, motorists face traffic congestion. Moreover, as the roads get wet and slippery, the traffic moves ever slower.