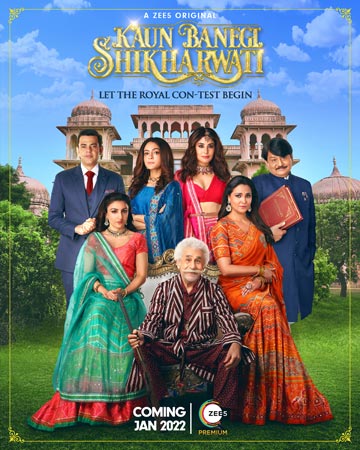 The cast includes Naseeruddin Shah, Raghubir Yadav, Lara Dutta Bhupathi and Soha Ali Khan. Naseeruddin, Raghuvir and Lara have previously been part of the web series Bandish Bandits, Panchayat, and Hundred, respectively. So, it’s not a case of these actors making a misstep without knowing what OTT has to offer. That can only be said about Soha Ali Khan, who is making her streaming debut with this show.

The producers are Sameer Nair’s Applause Entertainment and Nikkhil Advani’s Emmay Entertainment. Both companies have made a mark in web series – Applause with Hostages and Scam 1992, Emmay with Mumbai Diaries 26/11. One of the co-directors of the show is Gauravv K Chawla, whose 2018 financial thriller Baazaar, starring Saif Ali Khan, was a decent watch. The performances and production values are expectedly great. Then what went wrong?

Even the premise had promise. The king of a present-day fictional Rajasthani kingdom Shikharwati, played by Naseeruddin, has to pay unpaid taxes worth Rs 32 crore within a month, or the government will snatch away his property. The kingdom is in a shambles, as the widower king lost all interest in it after his four daughters left six years back. The king’s only companion is his man Friday, who puts up with his tantrums and whimsies.

Seeing that he will be unable to pay the government, the king conspires with his number two to get his daughters back to the house, and dump his fiscal responsibilities on them. For this, he pretends to die, and engages his daughters to compete with one another in a series of Roadies-style tasks. The winner will inherit Shikharwati.

The king’s daughters, who don’t see eye to eye, have nothing in common with each other. Devyani is confident of her wealth and status. The second child, Gayatri, is looking for inner peace in an ashram. Spoilt brat Kamini is a social media influencer. The youngest, Uma, is a video-game designer.

They are all handed some quirks – Devyani is a perfectionist mom. Gayatri is a perpetual validation-seeker. Kamini is just annoying while just about anything can trigger Uma’s allergies.

But over the course of 10 episodes, they remain caricatures and never grow into three-dimensional characters. The problem with Kaun Banegi Shikharwati is its writing, which seriously tests the viewer’s patience for 300 odd minutes. If the script itself is bad, a top-drawer cast and crew cannot save the project. It’s bewildering to see such a poorly developed screenplay get bankrolled and attract such talent.

Creator and co-director Ananya Banerjee’s attempt is to create a heartwarming, goofy comedy, where the oddball king annoys the four women, but occasionally shares poignant moments with them, until the daughters resolve their differences and come together to save Shikharwati. That is a fine idea, but she is unable to turn it into a compelling screenplay.

The dull family history padding the characters is really unremarkable and not as interesting as the makers think. The stakes are never high to the viewer, because they are clearly never important to the characters themselves. Epiphanies are easily and frequently reached. Characters solemnly reconsider their lives, as they ponder something unimportant, but the background score would suggest otherwise. The dramatic highs are mapped out, but unearned.

For example, the king had been pitting his daughters against one another since they were children, until they grow up to be constantly competing with each other. This leads to an awkward moment in a party in the first episode and Devyani, without any foreshadowing, drops a look-at-what-you-made-us and storms out of the house, the other sisters following her. Where did that outburst come from?

It’s like Ananya Banerjee’s objective with this scene was to have the daughters point out that their dad is pretty dysfunctional, for which they cut him off for six years, but she doesn’t know how to reach there. A few scenes later in the same episode, Devyani again has a moment where she says the themes of the series out loud. Themes should automatically emerge from the drama instead of characters expressing the directors’ intentions with dialogue. But the drama is anyway non-existent here.

The worst crime of Kaun Banegi Shikharwati is that it’s not even funny. It reminded me of a 2018 web series called Shaitan Haveli, created by and starring Varun Thakur, who also stars in Kaun Banegi Shikharwati. Shaitan Haveli felt like a show where the creators were too intoxicated with the cleverness of their premise to work hard on a screenplay that did justice to their idea.

At the end of 10 episodes, Shikharwati remains in the screen, forget reaching the head or the heart.