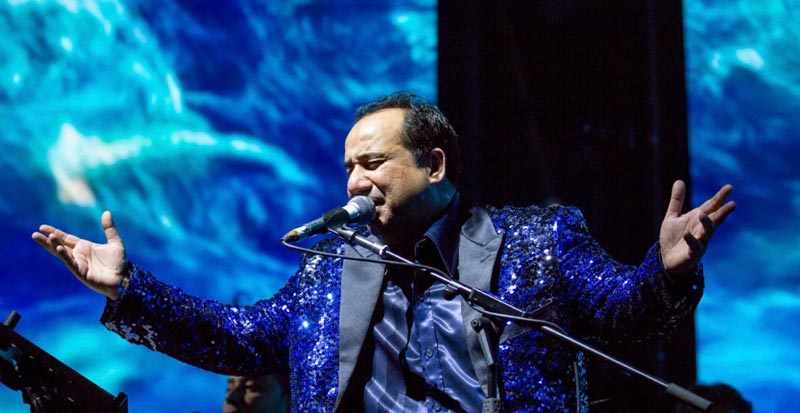 His voice was like a warm breeze on an otherwise cold night. Pakistani singer Rahat Fateh Ali Khan, who sang to more than 4,000 people at the Coca-Cola Arena in Dubai on December 30, held his audience captive.

He began the four-hour ‘Me, Myself and I (Reloaded)’ concert presented by PME Entertainment with a cover of ‘Sanu Ik Pal Chain Na Aave’.

The song, originally sung in 1993 by the legendary Nusrat Fateh Ali Khan, was brought back to life in Ajay Devgn and Ileana D’cruz’s movie ‘Raid’.

Next came the popular numbers ‘Mere Rashke Qamar’, ‘O Re Piya’, ‘Afreen Afreen’ and many other foot-tapping hits from Bollywood.

During the concert, he revealed his favourite artist has always been Kishore Kumar.

For the first time ever he performed Kumar’s popular hits such as ‘Oh Hansini’, ‘Ae Mere Dil Ke Chain’, ‘Meri Bighi Bighi Si’ from ‘Anamika’ and many more.

Next, Khan belted out originals – the first being a popular title track from the Pakistani drama ‘Khuda aur Mohabbat’, ‘Mere Pass Tum Ho’.

The trained qawwali singer has been making waves over the past few years – and this gig proved why. In the third act, he went for fusion, singing ‘Lage tum Se Man Ki Lagan’, ‘Teri Meri Prem Kahani’ and ‘Kitna Sauna Tujhe Rab Na Banaya’.

After a brief interlude and change of mood and costumes, the musicians were back on stage for some semi-classical and Sufi numbers.

The audience sat enthralled, swaying or tapping their feet to the beats. If you ever missed the senior maestro Nusrat Fateh Ali Khan, this was an ode to his musical legacy. When the clock hit 12am, things finally began to wind down – but until the last note, we sat staring, listening and enjoying the warm voice on the cold winter night.