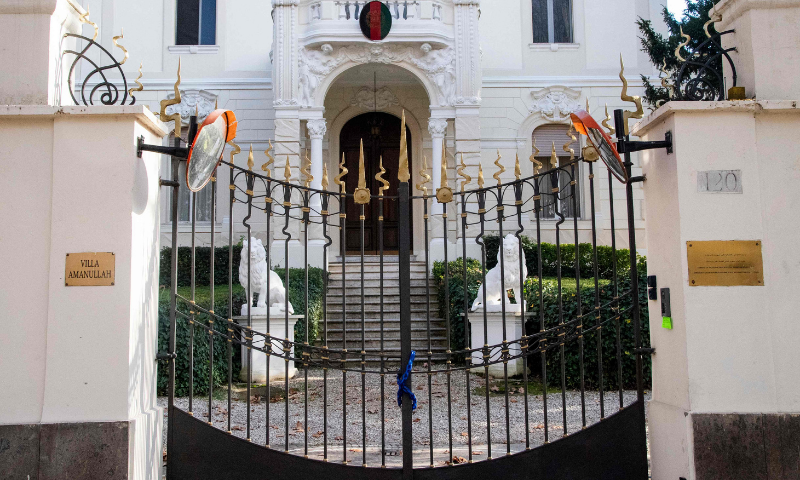 ROME: Police were called to Afghanistan’s embassy in Rome this week after a sacked Afghan diplomat claiming ties to the Taliban attacked the ambassador, the mission said.

Many of Afghanistan’s embassies are in diplomatic limbo, with staff still loyal to the Western-backed government toppled by the Taliban last August.

The Taliban have not appointed new representatives to most missions, however, and their government is not recognised by any nation.

In a statement published on social media on Tuesday, the Rome embassy said a diplomat — appointed by the former Afghan government but recently dismissed — returned to the mission earlier that day, claiming he had been named ambassador by the Taliban.

“Later he attacked the ambassador in the presence of an embassy employee but the ambassador defended himself and called the Italian police,” read the statement, written in the Dari language.

It named the dismissed diplomat as Mohammad Fahim Kashaf, saying he lost his job due to “lack of commitment to national values and the values of the Islamic Republic of Afghanistan”.

Police escorted Kashaf — who had been with his child — out of the embassy, while the ambassador was unharmed, it said.

An Afghan diplomatic source said Kashaf had “switched loyalty” to the Taliban, and had been “beaten up” by his former colleagues.

The Rome embassy did not return a telephone call and email seeking comment.

Police in Rome said a “misunderstanding” had taken place at the embassy, but provided no further details.

The Taliban’s foreign ministry in Kabul denied Kashaf been appointed ambassador, but also said he had not been dismissed.

It said records showed Kashaf was appointed first secretary at the embassy in December 2020, with a contract valid until December next year.

“Our records show that he continues to be a diplomat and his contract had not been terminated,” said foreign ministry spokesman Abdul Qahar Balkhi in a statement.

“But the ministry has also not appointed him as ambassador of the Afghan embassy in Rome. Kashaf’s contract is valid and his termination is illegal.” There has also been a diplomatic standoff at the UN, with representatives of the former and current regime both claiming Afghanistan’s seat.