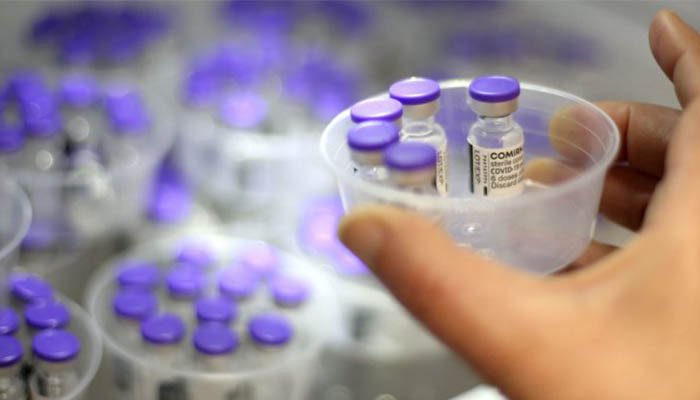 BERLIN: Germany’s BioNTech and US pharma giant Pfizer, which together developed a COVID-19 vaccine in record time, said Wednesday they are working on a shingles shot using the same mRNA technology.

Moderna meanwhile announced it had dosed its first volunteer for a vaccine against Epstein-Barr virus (EBV), the cause of mononucleosis.

The three companies are leveraging the same mRNA technology they used to develop highly successful COVID-19 vaccines towards other diseases, in a potential breakthrough moment for modern medicine.

Pfizer and BioNTech signed a partnership deal and are aiming for clinical trials to start in the second half of 2022, they said in a joint statement.

“The collaboration aims to develop a new mRNA-based vaccine against shingles, leveraging the expertise and resources of both companies,” said Ugur Sahin, CEO and co-founder of BioNTech.

The messenger RNA method made its debut with the Pfizer-BioNTech coronavirus vaccine, which was the first jab against COVID to be approved in the West in late 2020.

Shingles is a common disease around the world caused by reactivation of the same virus that causes chickenpox.

It can lead to extremely painful, disfiguring skin patches, and in rare cases to facial paralysis, deafness and blindness.

While there are currently approved vaccines for shingles, Pfizer and BioNTech said they wanted to develop an improved vaccine that potentially shows high efficacy and better tolerability.

The coronavirus jab developed by US biotech Moderna together with the US government agency National Institutes of Health (NIH) also uses mRNA technology.

Moderna said Wednesday it had dosed its first of 270 participants aged 18-30 in a clinical trial for the vaccine against EBV — a virus for which no vaccine is currently approved.

EBV is highly common, thought to infect more than 80% of Americans by the age of 19. It is spread through bodily fluids, such as saliva, and typically contracted in early childhood or adolescence.

Infections during teenage years are more symptomatic, and can lead to infectious mononucleosis (IM), sometimes called “kissing disease,” a condition that can cause fever, fatigue, sore throat and swollen lymph nodes.

Patients can in some cases be affected for weeks or months, sometimes requiring hospitalization. EBV is also a “latent virus” that can be reactivated in rare cases.

Scientists believe mRNA vaccines, which provoke an immune response by delivering genetic molecules containing the code for key parts of a pathogen into human cells, could be a game-changer against many diseases.

They also take less time to develop than traditional vaccines, which are generally based on an inactivated pathogen, or a live but weakened form of a microbe.

BioNTech is also working on an mRNA-based malaria vaccine backed by the World Health Organization, the Africa Centers for Disease Control and Prevention and the European Union, with trials due to start in late 2022.

Pfizer is developing an mRNA flu jab, as is Moderna. Moderna is also developing a vaccine against HIV and flu, among others.