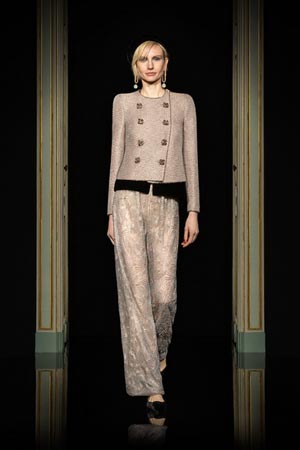 Designer Giorgio Armani said Tuesday he was cancelling his Giorgio Armani and Emporio Armani men’s fashion shows in Milan this month and his Prive haute couture show in Paris because of soaring coronavirus cases in Europe. The decision makes Armani the first major designer to pull out of the Milan men’s previews for fall/winter 2022-23 scheduled for Jan. 14-18. In a statement, the fashion house said the decision was “made with great regret and following careful reflection in light of the worsening epidemiological situation. “As the designer has expressed on many occasions, the shows are crucial and irreplaceable occasions but the health and safety of both employees and the public must once again take priority,” the Armani statement said. Milan’s fashion council had announced last month that 22 brands, from Armani to Zegna, would be staging live runway shows, with just nine opting for digital presentations. It did so following the success of the September womenswear shows that featured 40 live runway previews, with mask requirements and limited invitees.