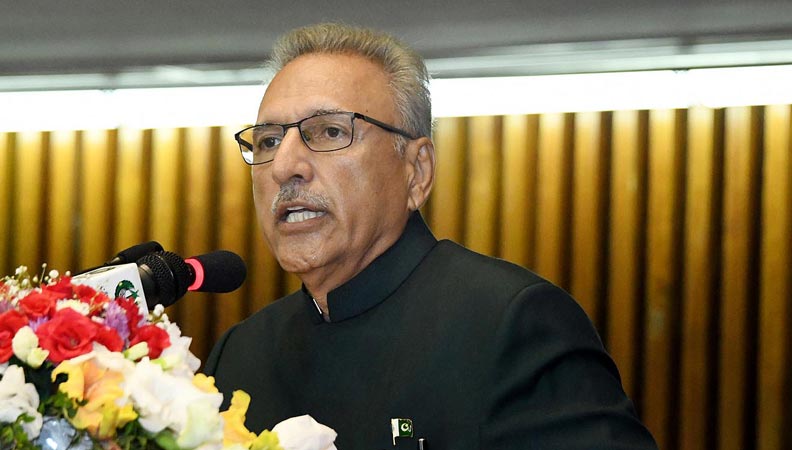 President Dr Arif Alvi Wednesday said India was on path to self-destruction with its Hindutva policy targeting all minorities as it was vainly planning to suppress the Kashmiris’ struggle for their right to self-determination with barbaric steps.

He said the unending oppression coupled with atrocities and human rights violations committed against the innocent Kashmiris in the Indian Illegally Occupied Jammu and Kashmir (IIOJK) and other minorities in India, were resulting into a fire that would eventually engulf India and dawn into freedom of the Kashmiri people.

The president was speaking at the book launching ceremony of Dr Muhammad Qasim Faktoo, a political Kashmiri prisoner who had been languishing in an Indian jail for the last 29 years.

Dr Faktoo’s book ‘Baang’ provides an insight into his sufferings and life-long struggle against the Indian illegal occupation of the IIOJK.

The event was organized by the Kashmir Youth Alliance (KYA) in collaboration with the Parliamentary Committee on Kashmir in connection with the observance of Kashmiris’ Right to Self-Determination Day.

President Alvi said Quaid-e-Azam Muhammad Ali Jinnah had regarded Kashmir as the jugular vein of Pakistan, which meant that the Pakistani nation and Kashmiris were tied together in permanent bonds of affections and brotherhood.

The Quaid had realized the Hindu machinations long ago and therefore, he parted ways during 1928, he added. The president observed that injustice was done during the Indo-Pak partition principles whereas promises made with the Kashmiri people by the world community had not been fulfilled.

He said India through its unilateral and illegal steps tried to bring demographic changes in the IIOJK, but those were denounced by the world bodies and the Organization of Islamic Cooperation (OIC) and global rights bodies.

The president opined that the Hindutva policy pursued by the recent Indian rulers had been a reincarnation of the Hindu’s supremacist ideology centuries ago. He referred to a book of Khushwant Singh, an Indian writer, who had predicted doom for India due to its self-destruction course.

The president said the Muslims could not be suppressed with injustices and oppression. The use of pellet guns against the Kashmiris had been a human disaster. Indian forces had been using rape against women as a weapon to silence the ever-growing voices for freedom, he added.

He said India was trying to change its history and there was a continuous onslaught against minorities, including Muslims and Christians. “No minority is safe in India,” he said, adding the Christian charity organizations like Mother Tressa Charity were banned from collecting foreign donations while churches were attacked by the Hindu zealots.

The president regretted that the world was driven through its priorities and vested interests like trade and economy, and was neglecting the humanity.

He also reiterated that Pakistan being a morality-based country would continue extending its moral, diplomatic and political support to the Kashmiri people in their just struggle for the right to self-determination.

The president said the sacrifices of Kashmiri leaders like Dr Qasim would ultimately result in freedom of the IIOJK from the Indian occupation.

He also stressed for further raising the IIOJK issue at the global fora through collective efforts.

The president cited the success of Prime Minister Imran Khan’s stance in highlighting the issue of Islamophobia, which also echoed in the recent comments of Russian President Vladimir Putin.

Similarly, he also credited the government and Foreign Minister Qureshi for effectively raising the humanitarian issue of Afghanistan and holding a successful OIC meeting. Chairman Parliamentary Special Committee on Kashmir Shehryar Afridi said on the Kashmir issue all the political parties in Pakistan were on the same page.

He reiterated the nation’s full support to the Kashmiris’ right to self-determination struggle. He also called upon the world community to realize its commitment made with the Kashmiri people and ensure a plebiscite over IIOJK in accordance with the United Nations Security Council resolutions. He also reminded the world to learn from the lessons in history.

On the occasion, Ahmad bin Qasim, son of Dr Faktoo, narrated the ordeals of his father after his arrest in 1993. He said the people in IIOJK did not accept Indian illegal occupation. Imran Riaz Khan, advisor of KYA and TV anchorperson, also expressed his views.