DG ISPR speaks at a press conference in Rawalpindi 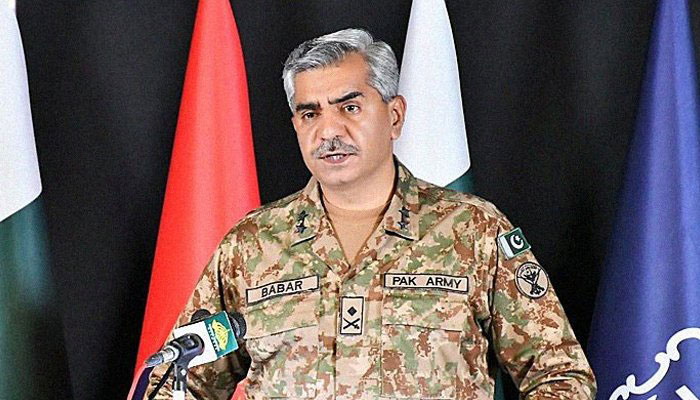 His press conference comes eight days after he praised Pakistan’s first-ever National Security Policy (NSP) as an “important milestone in the country’s security” in a tweet.

DG-ISPR stated that speculations regarding a deal with PML-N supremo Nawaz Sharif are unsubstantiated and baseless. It is better to minimize such discussions as the country has far important issues like health and education.

Furthermore, the DG ISPR said that they are completely focused on erecting a fence on the Pakistan-Afghanistan border and will complete it as soon as possible.

“Our martyrs have laid down their lives for erecting this fence and 67 special wings have been formed for FC Balochistan and FC Khyber Pakhtunkhwa to secure the border,” he said.

While speaking over threats being hurled from Indian military leadership, the DG ISPR said that it depicts particular political thinking which has dragged India towards the path of religious extremism.

“Indian measures will have a negative impact on the region,” he said.

He said that India has turned Kashmir into a place of worst humanitarian crisis as the occupied territory has been under siege since August 2019.

Talking about Operation Radd-ul-Fasaad’s success over the past year, he said it is a project that is neither military nor area-specific. Pakistan’s security forces have conducted operations, destroyed organised structures of terrorists, and eradicated several terrorist organisations in the course of work under this operation, he said.

In 2021 alone, under the operation, more than 60,000 intelligence-based operations were conducted, he said.

Maj Gen Iftikhar, according to ISPR, assured the nation that Pakistan’s armed forces will play their part in achieving the vision laid out in the policy.