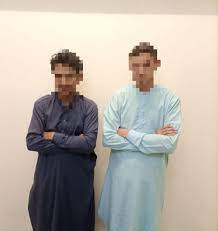 KARACHI: Two males have been arrested by the Federal Investigation Agency (FIA) for reportedly photographing, harassing, and extorting students at the University of Karachi.

According to an FIA spokeswoman, Fazal Dad, a rickshaw driver, and Adnan Ali, the driver of a varsity professor, were arrested for their suspected involvement in blackmail, harassment, extortion, and distribution of pornographic videos of students at the University of Karachi.

The detained accused would make objectionable videos of students without their consent.

The spokesperson relayed that an FIR was lodged against them on the complaint of a woman who stated that the two men were blackmailing her to pay money.

He said a forensic analysis of mobile phones and other equipment seized from the arrested men established that they were involved in blackmailing and harassing at least seven “couples” on the campus using their videos and pictures.

However, one of the victims ventured to file a police report against the accused, according to the spokeswoman.

They are the subject of a new investigation. The FIA is also looking into the possibility of other university workers being involved in the crime.