Thailand has reopened Maya Bay, a white sand beach made famous by the 2000 film The Beach starring Leonardo DiCaprio, more than three years after closing it to allow its ecosystem to recover from the impact of thousands of visitors each day.

The beach, surrounded by 100-metre high cliffs, lies on the island of Phi Phi Leh in the Andaman Sea, and is only accessible by boats from nearby spots such as the islands of Phuket or Phi Phi, or mainland Krabi.

Authorities shut the whole of Maya Bay to the public in 2018, saying coral reefs and beach areas had been damaged by constant tourist activities. But since the start of this year some visitors have been allowed to return.

“The sharks have come back, coral reefs are regrowing, and the water is clear again,” Yuthasak Supasorn, the governor of the Tourism Authority of Thailand, told Reuters.

“These things show that nature will heal if we give it time, and we have to work to keep it that way too.” 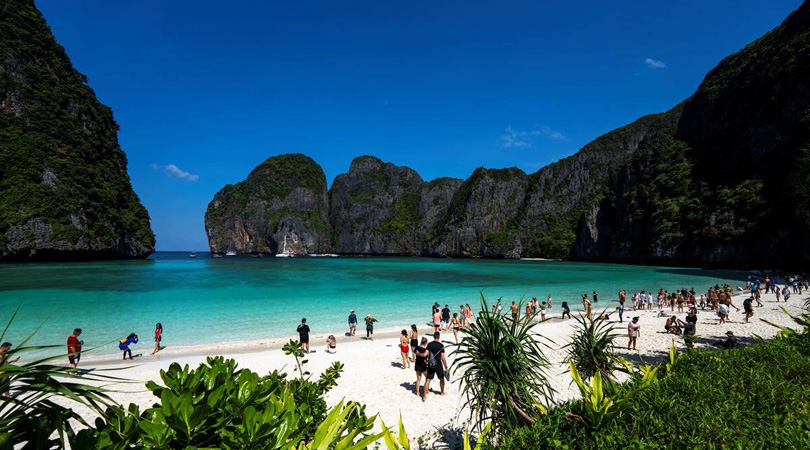 To ensure it remains protected, authorities said only up to 375 visitors will be allowed to visit at one time and swimming will be prohibited for now. Boats will only be allowed to dock at a designated location at the back of the bay to avoid damaging coral reefs, they said.

Before the coronavirus pandemic, tourism accounted for about 12 percent of Thailand’s economy and was a key driver of growth, with the country attracting 40 million visitors in 2019.

But mass tourism has often come at a cost to the environment in Thailand and other parts of Southeast Asian, with once-beautiful tropical beaches becoming polluted and strewn with garbage.

“Maya Bay is beautiful, it’s a marvellous place,” said Manuele Panin, a 40-year-old tourist from Italy, who was visiting the beach.

“I think it is fine that it has been closed all this time to protect the nature and allow it to restore and recover.”