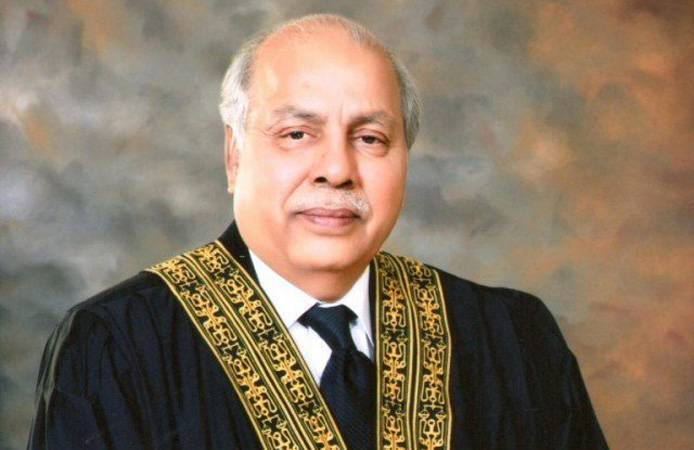 A three-member bench – comprising Chief Justice Gulzar Ahmed, Justice Qazi Muhammad Amin and Justice Ijazul Ahsan – heard the case pertaining to demolition of encroachments in Karachi. During the course of proceedings, the attorney general pleaded the court to reconsider its December 21, 2021 order for demolition of Madina Mosque on Tariq Road, Karachi.

He said religious tensions were rising due to the court’s order. Upon this, the chief justice responded that the Sindh government could provide alternative land for the mosque, if it wanted. Addressing the AGP, he said, “I have seen a park with my own eyes”. Justice Qazi Amin said religion was being used in land grabbing adding that there was a difference between a place of worship and a place of residence. “Building a mosque on encroached land is a non-religious act as Islam does not allow this,” he added. He said if anyone wanted to build a mosque, they should built with own funds.

The attorney general said he knew it was the federal and provincial government’s duty to provide land for the mosque. However, he again pleaded the court to reconsider its decision. The chief justice said that the court could only order delay in the demolition of the mosque until a new site was found for it.

The AGP said that the Sindh government was not a party to the case and pleaded the court to seek a detailed report on the mosque from the provincial government, and the demolition should be stopped till then. Upon this, the Chief Justice remarked that the order to remove encroachments from the park would not be withdrawn. “Should the court withdraw all its orders?” he asked.

The AGP pleaded the court to stop the order to demolish the mosque till submission of the Sindh government’s report. The chief justice said that the order to remove encroachments from the park would not be withdrawn.

Later, the court sought a report from the Sindh government within three weeks and adjourned hearing till January 13. Meanwhile, Chief Justice Gulzar Ahmed criticised the Khyber Pakhtunkhwa government, saying no work had been done in the government health sector in the province. “Where are billions of rupees of the KP government going?” he asked as a three-member bench headed by the CJP heard a case regarding rising cases of breast cancer. The country’s senior-most judge said there were no X-ray machines or oxygen systems available in government hospitals in KP. “Ineligible people were hired on recommendations from top to bottom in KP hospitals,” the CJP remarked.

During the hearing, the Advocate General told Justice Gulzar that the KP government has started issuing health cards to its citizens so that they can avail various health facilities. Additionally, he stated that every registered citizen will be given a treatment facility of up to Rs1 million. In response to the Advocate General’s statement, the chief justice said, “You must have allocated Rs5 to 6 billion so that people can make money out of it.”