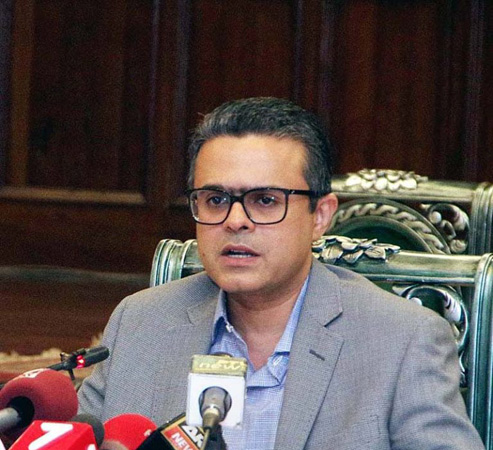 Special Assistant to Chief Minister (SACM) Punjab for Information and Spokesperson Punjab Government Hasaan Khawar Tuesday said that the government was making every effort to felicitate pilgrims visiting Pakistan so that they could spend a memorable time here.

Talking to the media at Wagah border crossing on the occasion of the return of 159 Hindu pilgrims from India on a four-day pilgrimage, he said that visit to one’s religious places is a very important day for any human being.

Hasaan Khawar said that the main purpose of such initiatives was to promote religious tolerance between the people of the two countries. He added that all religious places including temples, mosques, gurdwaras and monasteries were revered by all Muslim. The Punjab government was providing roads and other facilities for easy access to all religious places.

Hasaan Khawar said that Punjab government was pursuing the policy of promoting religious tourism in the province as per vision of Chief Minister Usman Buzdar. “We are committed to attracting tourists from all over the world to be our ambassadors.”

He said that the Kartarpur corridor was a game changer project of the present government, adding that exchange of such delegations would promote goodwill between the two countries.

On the occasion, Chairman Pakistan Hindu Council Ramesh Kumar said “We should not stop dreaming of increasing mutual love between the two neighboring countries. Reconstruction of four major temples of the Hindu community was a very welcoming step taken by the government, he added. By the end of January, a delegation of 170 people would be taken to Delhi and Ajmer from Pakistan, he informed.

Ramesh Kumar said “We want India and Pakistan to have fraternal relations like those between the United States and Canada.”

According to a spokesperson for the office of Ombudsman Punjab here, the Ombudsman resolved 64 out of 84 complaints about an interruption in the issuance of educational stipends.

He said that the secretary school education department also ensured to resolve the remaining 20 cases in compliance with the direction of Ombudsman Azam Suleman Khan. Similarly, district education authorities and district monitoring officers had been further activated to avoid any further delay in payment of stipends to the students in 16 different districts. The spokesman explained that the Ombudsman Office took this initiative in the best public interest to facilitate the students in their studies.

Meanwhile, Ombudsman Azam Suleman Khan also directed the school education department, Punjab Social Protection Authority and Punjab Information Technology Board to jointly develop handy software to ensure timely payments to the students. Alongside, they have been further advised to launch an SMS alert service for students. “It would keep the students abreast of subsequent action on their applications,” the spokesman added.