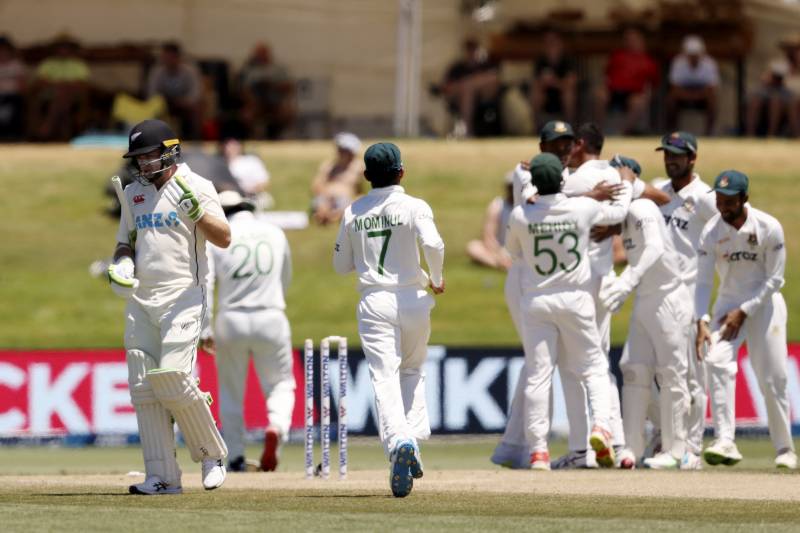 Bangladesh captured the crucial wickets of Tom Latham and Devon Conway, leaving Will Young and Ross Taylor to repair the innings as New Zealand went to tea on day four of the first Test 62 runs in arrears on Tuesday.

Young was 32 and Taylor on four with New Zealand 68 for two at Mount Maunganui’s Bay Oval after Bangladesh had built a 130-run lead before their first innings folded for 458.

Latham, who made only one in the first innings did only marginally better second time around.

He had reached 14 in his second knock before nicking a short Taskin Ahmed delivery onto his stumps to continue a string of low scores since the first Test against India in late November.

The stand-in New Zealand captain has not settled at the crease in his last four innings.

Conway, New Zealand’s first innings centurion, grafted to 13 before he edged a ball from Ebadot Hossain on to his pads and it ballooned out to Shadman Islam at gully.

The original call was not out but when overturned on review Ebadot produced his trade mark salute which he says is a tribute to his employers, the Bangladesh Air Force.

Young lived dangerously giving Ebadot hope when he edged the quick just wide of third slip while an edge off Mehidy was dropped by the wicketkeeper.

It was an impressive team effort with half-centuries for Mominul Haque, Liton Das, Mahmudul Hasan Joy and Najmul Hossain Shanto as well as a 47 by Mehidy.

When New Zealand thought they had seen off all recognised batsmen, Mehidy and Yasir Ali put on 75 for the seventh wicket.