Jan 5 to be observed as Right to Self-Determination Day 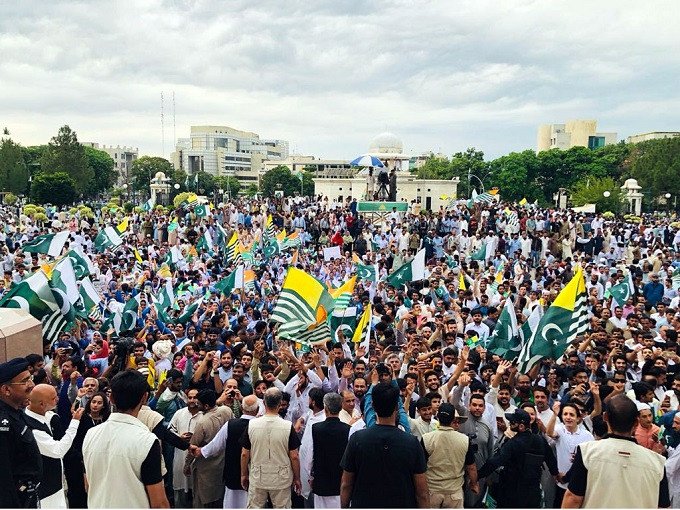 MIRPUR: Jammu and Kashmir people inhabiting both sides of the Line of Control and rest of the world will observe the right to self-determination day on January 5, with the renewal of pledge to continue their ongoing indigenous struggle with full vigour.

The day is observed every year by Kashmir to invite the attention of international community and the United Nations towards the early grant of right to self-determination to Kashmir through implementation of the historic resolutions on Kashmir passed this day in 1949 by the Security Council of the UNO.

Official sources told APP here Sunday that all necessary arrangements were being given final touches in Azad Jammu Kashmir to observe the day to be followed by the public rallies, besides special gatherings and processions, in all 10 district headquarters of the liberated territory as the hallmark of the day.

The special meetings would highlight the importance of early grant of the right to self-determination to Jammu Kashmir people – which was being suppressed and denied by India since over the last six decades.

Speakers in these meetings will reiterate Kashmiris’ just and principled stance before the world that they (Jammu Kashmir people) would continue their struggle for right to self-determination till the achievement of the ultimate goal.

They would particularly highlight the reality with the earnest demand about early grant of the birth right of self-determination to Kashmiris without further delay, which was being denied by India for the past over 65 years because of her traditional hostile and stubborn attitude.

The right to self-determination day reiterates the long cherished demand of the Kashmiris that they should be granted their birth right to decide about their destiny under the spirit of the internationally-acknowledged UN resolutions.

“It would be once again declared by the Kashmiris before the world, through the special meetings at both sides of the Line of Control and rest of the world that the Kashmir problem should be resolved only in accordance with the United Nations resolutions and no solution of the lingering global dispute sans the aspirations of the Kashmiris would be acceptable to them (Jammu Kashmir people),” said top PTI AJK leader and former chairman Mirpur Development Authority Muhammad Sideeque – one of the organisers of the scheduled special meetings to be held on January 5 in Mirpur.

Sideeque said that participants of the scheduled rally would reiterate Kashmiris longstanding demand for the early settlement of Kashmir issue according to their wishes.

A right to self-determination day rally will be held at district court premises in Mirpur on January 5. The procession will be taken out which will later converge into the special ceremony at the Kashmir Press Club hall under the auspices of Convener Jammu Kashmir Free Media Association where speakers will highlight the importance of the day.