The world’s second-tallest building is now complete and is an astonishing 2,227ft tall

The world’s second-tallest building has now reached its maximum height – and it’s a sight to behold, as pictures show. Merdeka 118 topped out last month in Kuala Lumpur, Malaysia, with the completion of the spire at its tip – making the skyscraper a staggering 2,227ft tall. This means it’s more than double the height of London’s Shard, which is 1,017ft high.

The 118-storey behemoth, which is set to open by the end of next year, has knocked the 2,073ft- high Shanghai Tower in China off its perch as the world’s second-tallest tower. Dubai’s Burj Khalifa, however, is still No.1 at a whopping 2,717ft in height.

The fourth-tallest building in the world is the Abraj Al-Bait Clock Tower in Saudia Arabia (1,972ft/601m), followed by the Ping An International Finance Centre in Shenzhen, China.

Merdeka 118, which is officially classed as a ‘megatall’ skyscraper, was designed to overlook a significant historical landmark in Kuala Lumpur – Stadium Merdeka, the site of the declaration of independence of the country in 1957. 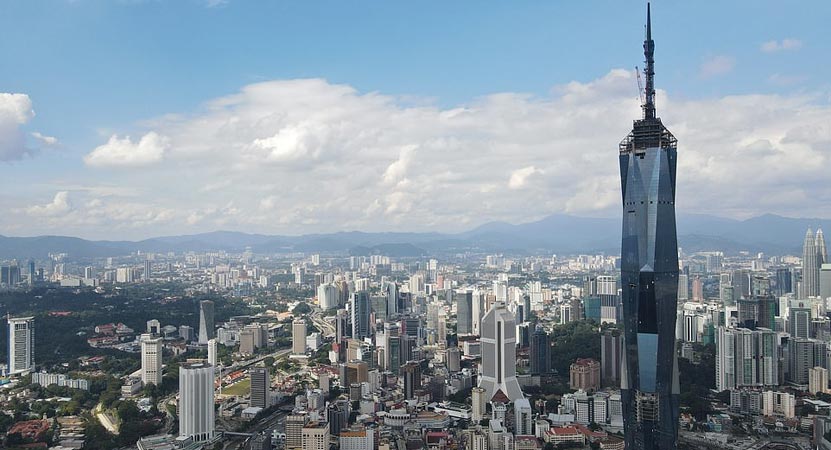 The sleek exterior of the tower, which was designed by the Australian firm Fender Katsalidis Architects, is made up of triangular glass panels, inspired by shapes ‘found in traditional Malaysian arts and crafts’.

Inside, the skyscraper covers over three million square feet of floor area.

Its upper floors will feature an observation deck – set to be the tallest in Southeast Asia – called ‘The View at 118’. It’s billed as a ‘must-visit attraction’.

Seventeen storeys of the skyscraper, which was developed by the fund management company Permodalan Nasional Berhad (PNB), will encompass a Park Hyatt Hotel.

According to a statement, hotel guests will enjoy a ‘fine dining experience’ and can check in to rooms and suites that offer ‘panoramic views of the Kuala Lumpur skyline’.

There will also be residential facilities and rentable office spaces incorporated into the megatall tower.

A glass-dome-covered ‘118 Mall’ with shops and retail facilities will be connected to the tower at its base, a statement reveals.

Beside the skyscraper, plans are in place to design a ‘Merdeka Boulevard at 118’ park, a textile museum with ‘a focus on Malay-world textiles’, a childcare centre and a new mosque – named ‘Masjid Merdeka’ – with a capacity for up to 3,000 people.

Malaysian Prime Minister Dato’ Sri Ismail Sabri bin Yaakob described the skyscraper as a ‘great achievement’ at a ceremony that celebrated the topping out of the tower last month, according to The Star.

He said: ‘Merdeka 118 will also be the first tower in Malaysia that has earned a triple-platinum rating with international sustainability certifications including the highly prestigious Leadership in Energy and Environment Design (Leed). ‘This is not only a great achievement in the field of engineering, but also further strengthens Malaysia’s position as a modern and developed country.’

PNB’s President and Group Chief Executive, Encik Ahmad Zulqarnain Onn, added: ‘The Merdeka 118 tower shares the same location with some of our beloved historical sites, which makes for a remarkable blend of the historical and the contemporary.

‘Despite the challenges of the pandemic, I am happy to report that the tower and the surrounding infrastructure upgrades are on track for completion by late 2022. ‘Today, I am excited to announce the incredible engineering achievement attained. We thank everyone who contributed to this important milestone.’