Ahad rushed the marriage in fear of losing me: Sajal 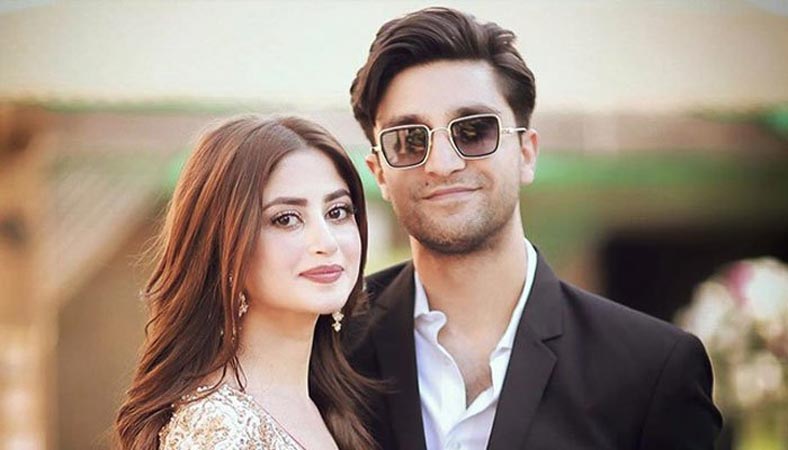 Sajal Aly is opening about the rumoured turbulence of her marriage with husband Ahad Raza Mir.

Speaking to Maliha Rehman in a recent interview, the Khel Khel Mein star shunned all speculations of a separation while she heaped praises for Ahad.

“Ahad has talked about me a lot in his past interviews but, somehow, I’m only doing it now,” she smiles. “It’s just that I rarely give interviews and I worry that, if I’ll get asked about Ahad, I’ll just end up going on and on!” gushed Sajal.

Walking down the memory lane, Sajal spilled how Ahad had asked her hand in marriage on the sets of Aangan.

“We had just got engaged when we started working in Aangan together. He had proposed to me and I had told him that he needed to reach out to my family. The very next day, I had fallen ill and Ahad’s mother had come to take care of me for three days. My father had been very surprised but my sister told him that Ahad’s family were thinking of marriage. Once I got better, Ahad’s parents came to Lahore, met my family and we got engaged.

She continued, “I later asked Ahad why he had been in such a hurry to get engaged. He told me that he had been afraid that, if he didn’t ask me to marry him, he would lose me, and I would marry someone else.”

Speaking about their Zee5 project after grand wedding in Abu Dhabi, Sajal revealed that her and Ahad have now decided to take a break from joint projects.

“I thought that Dhoop Ki Deewar had a simple story and I would be working with a great team,” she says about the series. “But Ahad and I did decide that we had been acting together far too frequently and that we should take a break from it, unless, of course, the sort of story comes along that we can’t resist.”