‘Sang-e-Mah’ first episode to be aired in cinemas? 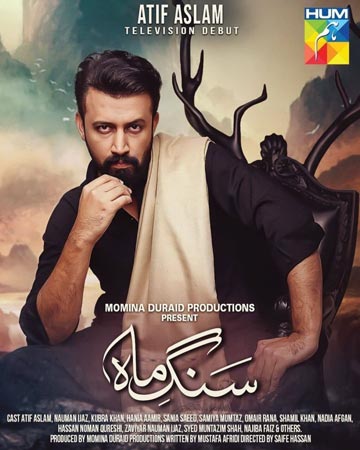 Drama serial Sang E Mah is a grand production of Hum Television Network, the drama is written by Mustafa Afridi and directed by Saife Hassan.

According to the director, the drama is basically part of a trilogy series, one of its part Sang-e-Mar Mar has already been aired on Hum TV years ago, it was successful and fans loved it. The second drama of the series is Sang-e-Mah, The third drama will be Sang-e- Siyah.

Netizens are coming with mixed reviews. Fans of Atif Aslam are happy. All the drama fans are liking this decision but many others are not happy with the release of drama episode in cinema, they are saying that Hum TV is high on some drug as a dramas should never be released in Cinemas instead they should create films for cinemas. Many fans are saying that this is pathetic marketing and Hum TV will lose audience.

They said that nobody watches TV shows in cinema in the world, it’s a wrong practice being set by them. The fans are saying that television is meant to be watched at home and it’s weird that the drama is being shown in cinema. A few said that only crazy people will see this in cinema.