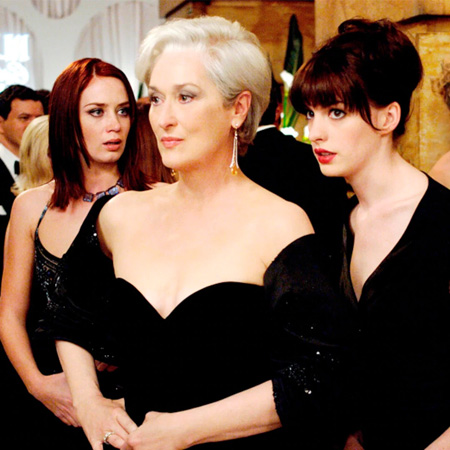 Never has an actress felt so grateful not to be the lead. Because more than a decade-and-a-half later, Tracie Thoms can still recall the terror she felt when Meryl Streep spoke those first intently hushed words at The Devil Wears Prada table read.

At first, Thoms explained to E! News, she thought the three-time Oscar winner was simply getting through the material, still formulating how she wanted to play unapologetically demanding Runway editor Miranda Priestly, a not-all-that-loose interpretation of Vogue’s Anna Wintour. “Some actors when they get to table reads, they’re still waiting to do the exploration process of the character,” she noted. “So they’re not trying to make decisions early.”

But, “maybe, a page-and-a-half in,” Thoms said of the script, adapted from Lauren Weisberger’s wildly popular novel of the same name, a take on her time as Wintour’s assistant, “I was like, ‘Oh, no. That is the choice. Oh my god, this is the most genius thing I’ve ever seen in my life.’ Because it made everybody at the table have to lean into her, to Miranda.”

Streep later admitted to lifting the idea from Clint Eastwood. “He never, ever, ever raises his voice and everyone has to lean in to listen,” she explained to Variety in 2016, “and he is automatically the most powerful person in the room.”

But her Method acting approach was her own brand of genius.

“She didn’t even look at Anne, except for when she talked about her sweater: ‘And then you got that hideous sweater from a Casual Corner’ or whatever,” Thoms revealed. “And I could feel Anne next to me just, like, wilt in her soul.” Before they took their seats, Thoms shared, Streep “was very sweet. And then that started. I was like, ‘That’s a lot coming for you, Anne. Good luck to you!’ I had no scenes with her, thank God. I would die.”

Instead, the actress-who’s popped up in everything from 2005’s Rent to Cold Case to 9-1-1-spent her four days on set singing along to the newly dropped Rent soundtrack with Hathaway.

“She was just happy to have somebody else around her that was nerdy like her,” joked Thoms of the future Les Misérables Oscar winner. “It was, like, the easiest job I’ve ever done because sometimes we didn’t even know if David had called action. We were just making up things about French fries. And then Anne would walk in and we’re like, ‘Okay, I guess we’re shooting now. Okay, great.'”

Fifteen years after the film trampled Superman Returns en route to a $326 million box office gross, Thoms’ memories remain so fond that she gets sucked right back in every time the comedy appears on her television screen. “I’m like, ‘Well, guess this is happening now. Again.'”

An appreciation for The Devil Wears Prada? Groundbreaking.

“Everybody loves it. I mean, I have so many men, like, very straight, hetero men confess to me, as if they need to, that they love The Devils Wears Prada-their guilty pleasure,” said Thoms. “I’m like, ‘You don’t need to be guilty about that. It’s a good movie. Stop it.'”So gird your loins, because we’re reliving all the magic from Streep’s demands to Emily Blunt’s audition misstep. By all means, read at a glacial pace. You know how that thrills us.