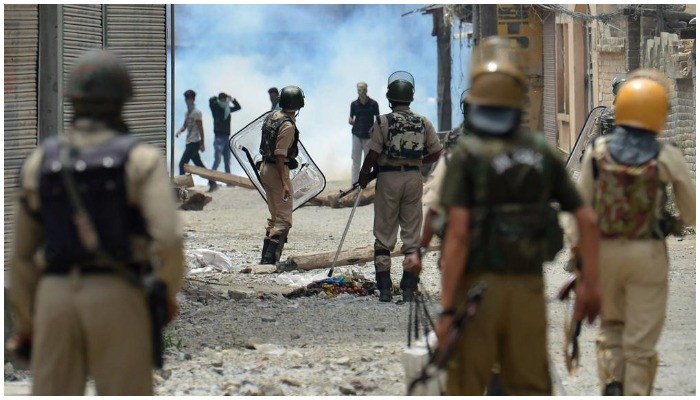 Indian troops killed 210 Kashmiris, including five women and as many young boys, in the occupied valley, according to a report by Kashmir Media Service Kashmir. The report, stated that 65 Kashmiris were killed by Indian troops in fake encounters while in custody.

It said the in December 2021 alone, Indian troops killed 31 Kashmiris, which left one woman widowed and two children orphaned.

“At least six people were injured due to [the] use of brute force by the troops and police personnel against peaceful protesters while 94 civilians, including youth, were arrested in the month,” it said, adding that Indian forces destroyed 11 residential houses during the period.

The report also mentions veteran separatist leaders Syed Ali Shah Geelani and Mohammad Ashraf Sehrai, both of whom died of ill health. Geelani was under house arrest at the time of his death and Sehrai died in police custody.

The report also makes note of the events following Geelani’s death, wherein his family had accused  Indian authorities of forcibly snatching his body. He was buried in a tightly controlled pre-dawn ceremony as Indian authorities imposed a lockdown across occupied Kashmir.

Authorities’ refusal of a public funeral had heightened tensions in the valley and led to clashes between angry citizens and police.

According to the Kashmir Media Service report, killings by Indian troops in the occupied valley had left 16 women widowed and 44 children orphaned in 2021.

The report highlighted that 487 people were injured as a result of the “use of brute force on protesters” in the valley, while 2,716 people, including rights activist Khurram Parvez, had been arrested in raids and crackdowns by Indian troops and police last year.

“Many of those arrested were booked under black laws, namely Public Safety Act (PSA) and Unlawful Activities (Prevention) Act (UAPA),” the report said.

It further said 13 women in Indian-occupied Kashmir were either “molested, abused or disgraced by men in uniform” during last year. Moreover, it said, Indian forces had destroyed 67 residential houses and structures in the valley during this period.

According to the report, Indian authorities did not allow Friday prayers for 45 weeks at the valley’s historical Jamia Masjid in Srinagar besides disallowing other religious activities like Muharram processions and Eid Miladun Nabi gatherings in 2021. It mentions resistance leaders detained in Delhi’s Tihar jail in “fake cases”, adding that over 4,000 more people were booked under PSA and UAPA and jailed in different prisons in occupied Kashmir and elsewhere in India.

According to the report, since the Indian government stripped Kashmir of the special autonomy it had for seven decades by repealing Article 370 of the constitution in 2019, Indian troops, paramilitary and police personnel had martyred 515 Kashmiris till date. It said 95,948 Kashmiris had been shot dead by Indian forces during the last 33 years in the occupied territory.