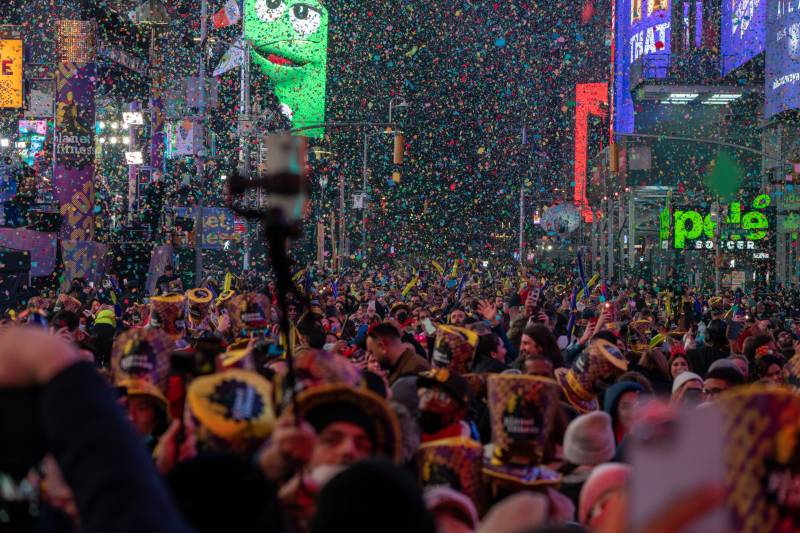 The world ushered in 2022 with scaled-back celebrations due to new restrictions aimed at slowing soaring Covid cases — although hope remained for a better new year.

The past 12 months saw a new US president and a fresh Adele album, the first spectator-free Olympics, and dreams of democracy from Afghanistan to Sudan and Hong Kong crushed by authoritarian regimes.

But the pandemic — now entering its third year — still dominated.

More than 5.4 million people have died since the coronavirus was first reported in central China in December 2019.

Countless more have been sickened or subjected to outbreaks, lockdowns and a slew of virus tests.

The year 2021 started with hope as life-saving vaccines were rolled out to around 60 percent of the world’s population, although many of its poor still have limited access and some of its rich falsely believe the jabs are part of some ill-defined plot. As the year drew to a close, the emergence of the Omicron variant pushed the number of daily new Covid-19 cases past one million for the first time, according to an AFP tally.

France on Friday became the latest country to announce Omicron was now its dominant coronavirus strain.

In Britain, the United States and even Australia — long a refuge from the pandemic — the variant’s prominence is driving record new cases. But the scaled-down event welcomed fewer revelers than in previous years, with about 15,000 people — all required to show proof of vaccination — allowed in.

Elsewhere, from Seoul to San Francisco, celebrations were again canceled or curtailed in the face of the infection surge.

In Madrid’s Puerta del Sol about 7,000 people — half the usual capacity — rang in the new year by eating grapes, one for each time the clock chimed up to 12. Dubai went ahead with its celebrations undeterred, with 36 firework displays at 29 locations.

But authorities warned they would fine anyone in attendance not wearing a mask.

Police officers patrolled the Champs-Elysees in Paris, which was lit with glittering red lights and festooned with “2022” balloons, also on the lookout for people without masks.

Most people were simply asked to wear one, but some who argued were fined.

“It is constraining to put on the mask… but it’s no problem” to follow the rule, said Antoine Pham, smiling. The 38-year-old and his partner had come from Belgium to Paris for the evening. In Sydney, which normally bills itself as the “New Year’s Eve capital of the world”, the vast harbor where people gathered to watch the city’s fireworks was notably uncrowded.

With tourists still unable to enter the country and many residents fearful of the rapid spread of Omicron, tens of thousands were estimated to have attended, rather than the usual one million-plus.

Still, the city saw New Year’s Eve in with a bang — igniting six tonnes of technicolored fireworks that lit up the Opera House and floating barges.

“I’m just trying to focus on the positive things that happened this year,” 22-year-old medical student Melinda Howard told AFP ahead of the show.

In Tunis, authorities cited a “rise in cases” of coronavirus for the last-minute cancellation of festivities. In contrast, South Africa — the first country to report Omicron back in November — lifted a curfew late Thursday to allow festivities to go ahead.

A new-year tragedy struck in India, where at least 12 people died and 13 were injured in a stampede at a religious shrine during Saturday’s early hours. Pilgrims had gathered to offer new-year prayers, officials said.

In Rio, celebrations on Copacabana Beach went ahead in a scaled-back format, although crowds still arrived at the traditional party spot.

After last year’s festivities were canceled due to Covid, it was a comparatively muted return for Rio.

A ban on musical performances, traffic and public transport made for a more muted atmosphere on the city’s famed beach.

“I was expecting many more people, and stress, but it’s calm, I like it,” said Colombian neuroscientist Alejandra Luna, 28, whose hope for 2022 is to “kiss and cuddle without thinking much about it”.

In Mexico City, authorities canceled a number of planned mass outdoor events, including a music concert on one of the capital’s main boulevards, following an increase in coronavirus cases.

“Health comes first and the cancellations are sending a kind of message that this is serious,” Victor Arturo Madrid, a 59-year-old teacher, told AFP. The World Health Organization has warned of trying times ahead, saying Omicron could lead to “a tsunami of cases”.

Many Western leaders have been hesitant to reimpose the strict controls seen in 2020, for fear of sparking a new economic downturn.

US President Joe Biden urged unity for the new year in a video message, during which he also praised “extraordinary” Americans.

Experts and non-experts alike hope that 2022 may be remembered as a new, less deadly phase of the pandemic.

“Hopefully 2022 is going to be better for everyone,” said 31-year-old reveler Oscar Ramirez in Sydney.

“Everyone in the world needs a big change.”