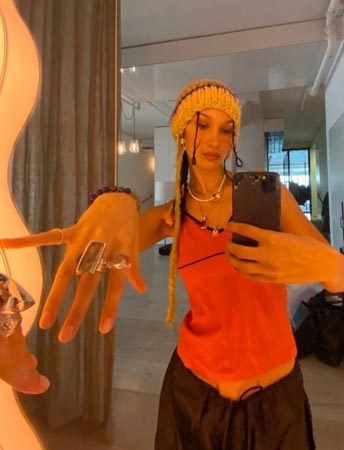 Bella Hadid is using an iPhone with a cracked back glass. The supermodel on Thursday shared a couple of mirror selfies where her phone is visible. She posted one of the pictures with a question mark, without asking anything.

The American fashion model, who reportedly has a net worth of more than $25 million, left her millions of fans wondering with her photos that showed she’s been using a broken smartphone.

Moreover, the model shared Kim Kardashian’s Instagram post regarding reduction in a Texas truck driver’s sentence and said she was in “Tears”.

Rogel Lazaro Aguilera-Mederos, 26, was found guilty in October by a jury in Jefferson County, Colorado, of four homicide charges along with multiple counts of assault and reckless driving stemming from the April 2019 fiery crash.

Kim Kardashian and Bella had voiced support for Rogel Lazaro seeking clemency for him.