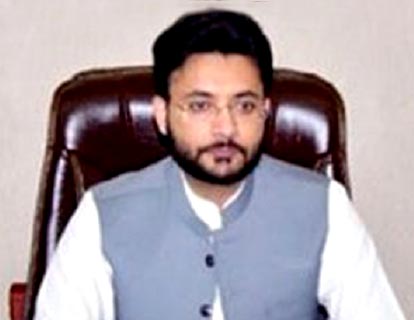 Minister of State for Information and Broadcasting Farrukh Habib Friday said that people of the country voted Prime Minister Imran Khan as they believe and support his vision to bring about real change and putting the country on way to progress and prosperity.

Addressing the annual cake-cutting ceremony of a news network-PNN during his visit to media channels’ office here, he hoped that New Year 2022 would bring new opportunities and happiness as the world community had to face severe challenge in shape of Covid-19 pandemic during previous the years 2020 and 2021.

The Pakistan Tehreek-e-Insaf (PTI) government had put significant efforts to minimise the economic implications of Covid-19 pandemic and introduced a number of projects for welfare of the people, he said.

The minister said that Prime Minister Imran Khan came in to power after a long struggle of 22 years for the uplift of the people and their rights, adding that it was first time in country’s history that Prime Minister Imran Khan started a social welfare programme under which Sehat Card of Rs one million to each family have been distributed so that they can get the medical treatment from private hospitals as well as other medical centres.

The minister said that 70,000 new companies were registered during the three years of PTI government as compare to 20,000 companies in five years of Pakistan Muslim League-Nawaz (PML-N), adding that the corporate sector companies earned the profit of about Rs1,000 billion, contributing a lot to strengthen the national economy.

“The PTI government has also introduced Ehsaas Ration programme with a 120 billion rupees”, he said, added that ‘Kamyab Jawan’ programme and a number of others were introduced for uplift of masses by the government.

“The PTI government has set an example by administering Covid-19 vaccination of Rs two billion dollars to more than 70 million people,” he said, added that 10 new dams would be in place soon so that the power outage issue could be resolved. These were the positive initiatives needed to be highlighted in media, he asserted.

The minister said that, “Punjab government has introduced district development package with a cost of Rs 360 billion, setting up eight mother and child hospitals, 19 new universities, completing mega canals and other infrastructure development for bringing development and prosperity in the province.”

Later, talking to APP, he said that the government had made Press Information Department (PID) paperless as now the advertisements were awarded online, adding that Associated Press of Pakistan (APP) had been transformed into Digital News Agency. Similarly a digital media wing was setup in Ministry of Information and Broadcasting (MOIB) for projecting the positive image and narrative of State, he maintained.

The MOIB was playing an effective role in to put forward States’ narrative and counter or expose fake news by the Indian media, he said and added that the government had also got passed a bill from parliament pertaining to media personnel and journalists’ protection.

Earlier, Farrukh Habib congratulated the management and journalists associated with PNN media network for completing one year and said, he hoped that the news network would conduct positive and factual based reporting to sensitise the people about various aspects and positive image of country.

Farrukh said: “This media group is a positive addition to media industry in Pakistan and added that media could highlight various issues and challenges prevailing in the society so that the government and departments concerned could take action for bringing improvement in peoples living style.”