Pedal, blend and enjoy fresh, no sugar juice in Ahmedabad 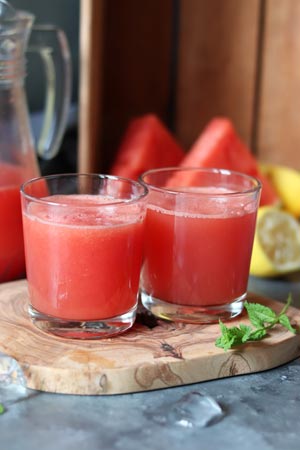 How does the idea of burning calories and then enjoying a glass of fresh, no-sugar juice sound to you?

If that has got you excited, we have some news! A juice shop in Gujarat’s Ahmedabad lets you do just that.

A video of customers peddling a cycle to get their choice of juice has been going viral on social media.

“Someone with full energy and one who has a big role to play in where we stand. Thanks @mohitkeswani1909 for visiting and making this watermelon juice with that killer smile,” the caption read.

The video has racked up more than 3.92 lakh likes.

The juice bar named ‘Greenobar’ has blenders attached to the front of a stationary cycle. So, the faster a person pedals, quicker the juice gets ready.

As per Yash Mehta, co-founder of the initiative and a Chartered Accountant by profession, Greenobar is inspired by a similar concept in the United States, where one makes smoothies on green bikes. “I came across the popularity of veganism and health in the US and UK when I was on a backpacking trip a few years back. So, I wanted to push something on those lines in India which has also been waking up to veganism and healthy living. I wanted people to experience something close to nature in a sustainable, organic way,” he told indianexpress.com, adding that began the initiative with two friends – Rajan Patel and Raj Jain.

The initiative which claims to be “a first-of-a-kind juice bar with zero wastage and complete focus on sustainability” promises “fresh, no sugar” fruit juices.

The fresh juices are then served in fruit shells like that of watermelon or coconut. “The idea is to go plastic-free. We also don’t use plastic or paper straws,” said the co-founder while talking about the initiative that began in September 2021.

One user said, “Fitness at its peak.” Another wrote, “It should be installed in gyms …apna juice khud bana kar piyo.”

Mehta shared they are soon going to launch a ‘green coin’. “These green coins will be credited to user’s online wallets. They will also be rewarded if they come walking, cycling, or running instead of a fuel-supported vehicle,” mentioned Mehta.

From improving cardiovascular health to blood circulation, cycling is known for its many health benefits. Apart from being a great cardio workout, it also helps lower blood pressure and protects against hypertension, stroke, etc.

Cycling is also an effective way for diabetics to keep blood sugar under control, and their weight in check. Better diabetes management and sugar control minimise the risk of health complications associated with the lifestyle disorder.

What do you think of the this ‘green initiative’?