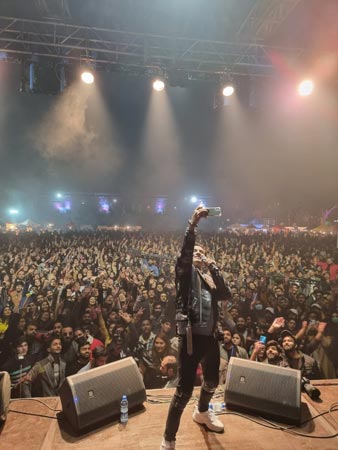 Showcasing his Rockstar skills and resonating the echoes of his swoon-worthy voice, Ali Zafar has once again won over the hearts of his millions of fans as he gave a high-energy performance at a highly crowded concert in Lahore.

The CMH Lahore Medical College was brimming with life last week as over six thousand young boys and girls gathered around to hear Ali Zafar live in a concert. Later, the Channo singer shared a video of the concert.

The crowd was seen going wild with Ali Zafar’s performance in the video posted on Twitter. The Rockstar captioned it, “Thank you Lahore for the love last night. You never fail to amaze me. #lahore #liveinconcert”

Ali Zafar also belted out regional songs at the concert, and the crowd was heard singing along Laila O’ Laila, Allay and Larsha Pekhwar.

The multitalented Channo singer is also set to perform at Pakistan’s largest concert on New Year’s night in Karachi. More than 21,000 have already booked their tickets for the concert.