* Explosion triggered by a remote-controlled device 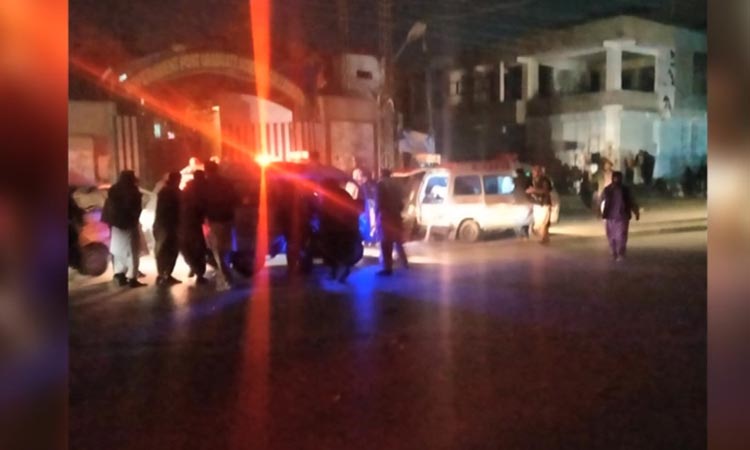 At least four people died and 15 others sustained injuries in a blast at Main Gate of Science College near Jinnah Road Quetta on Thursday evening.

According to police sources, the blast occurred near the main gate of Science College. As a result, four people were martyred while 15 people received injuries. Balochistan Health Department media coordinator Dr Wasim Baig confirmed the death toll in a statement issued soon after the incident.

Separately, Civil Hospital Quetta Medical Superintendent Dr Javed Akhtar – who had initially said that three bodies and 13 injured had been brought to the hospital – also confirmed that the death toll from the blast had risen to four and the number of injured to 15. He said the injured were being treated after declaring emergency in the hospital.

Adviser to the Balochistan Chief Minister on Home and Tribal Affairs Mir Ziaullah Langove said the explosion was triggered by a remote-controlled device. Langove visited the site of the blast and expressed sorrow over the loss of lives.

Speaking to the media, he said, “The Pakistani nation has been targeted in the blast,” but those who wanted to disrupt peace would not succeed in their nefarious designs. He further stated that elements spreading terror could not deflate the nation’s morale. The adviser said “fool-proof” security arrangements had been made for New Year’s Eve.

According to reports, the blast took place a few minutes after a procession of Jamait Ulama-e-Islam Nazaryati came to an end. Police cordoned off the entire areas and started investigation about nature of blast.

Balochistan Chief Minister Mir Abdul Qudoos Bizenjo also condemned the incident, terming it an “act of terrorism”. In a statement, Bizenjo said he was saddened by the loss of lives in the “act of terrorism”, and that those targeting innocent citizens deserved strict punishment. He expressed dissatisfaction over security arrangements in Quetta.

The chief minister also sought a report on the incident and security arrangements in the city from the Balochistan inspector general of police. He also directed Langove to review the security plan for the city and make security arrangements more effective. “It is the responsibility of police and security agencies to protect the lives and properties of people. Citizens cannot be left at the mercy of terrorists,” he said.

Bizenjo also issued directives for ensuring the provision of proper medical treatment to the injured, further instructing the provincial health minister to oversee the provision of medical treatment to them. Minister for Information and Broadcasting Chaudhry Fawad Hussain strongly condemned the blast in Quetta and expressed grief over the loss of human lives in the incident. In a statement, he expressed his condolences to the families of those killed in the blast and prayed for speedy recovery of the injured. Minister of State for Information and Broadcasting Farrukh Habib Thursday strongly condemned the blast in Quetta, claimed at least four lives and left over a dozen injured. In a statement, he sympathized with the families of those who died in the tragic incident and prayed to Allah Almighty for early recovery of the injured.