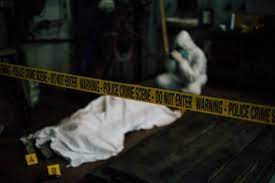 KARACHI: Two adolescent students have been arrested in Malir, Karachi, after reportedly shooting and killing an elderly man for a TikTok video.

Six days ago, a man named Qamar Raza was slain near Ghazi Chowk in Jafar-e-Tayyar Society.

The Malir SSP said that the police have arrested two students, both aged 14, in the murder case. The teenagers shot the man dead just to make a video for TikTok, he revealed.

CCTV footage of the bizarre incident shows four youngsters on two motorcycles. Fazil Ali, one of the suspects, fired at Qamar Raza, the police said.

The jailed youngsters were found with the murder weapon and a motorcycle. According to the SSP, the weapon has been submitted to a facility for forensic analysis.

According to him, the suspects supplied information about their two on-the-run friends throughout the inquiry, and raids are being performed to apprehend them as well.