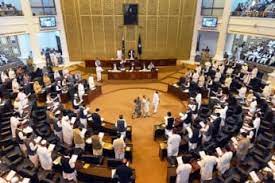 KARACHI: The Pakistan Tehreek-i-Insaf (PTI), Muttahida Qaumi Movement-Pakistan (MQM-P), and Grand Democratic Alliance (GDA), major opposition groups in Sindh and allies in the federal government, have decided to stage a sit-in outside Chief Minister House against the recently passed local bodies bill from the assembly.

According to reports, the PTI, MQM-P, and GDA have completed their consultations on the proposed opposition to the newly enacted bill and have decided to organise a sit-in outside the CM House unless their demands are met.

The grand sit-in outside CM House is likely to be held on January 07 and the opposition parties will reach out to other political groups for their support in this regard. Representatives from traders, civil society and lawyers will also be invited to the sit-in.

The Sindh Assembly had passed the amendment bill for a new local government (LG) system with a majority amid the strong protest from the opposition.

The assembly also passed the bill for giving powers to the mayor to head Solid Waste Management Board. It is important to mention here that Sindh Governor Imran Ismail had rejected the local bodies bill after raising objections.

Sindh Chief Minister Murad Ali Shah remarked during his speech that he had requested the opposition to read the bill relating to the new LG system once. He also stated that those ready to propose revisions to the bill will be welcomed by the government.