* Prior to this book, four other books have been published by the same author so far 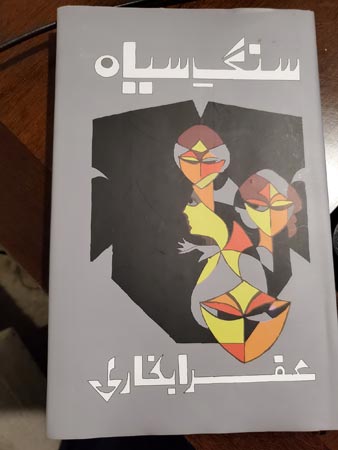 Afra Bukhari is neither a socialite nor part of any literary groupings. Despite that, she has acquired ample experience of life as a housewife and later as a widow and raise her children to create masterpieces in short story format. There was a gap of fifteen years in her writings and she started writing again after 1993. During this gap she raised her children single handedly and gave them top class education. Amir Faraz, her son is an established lawyer and presently enjoys a senior position in National Bank of Pakistan. He is a profound short story writer also and his contributions to the promotion of literature as an important member of Halqa-e-Arbab-e-Zauq are immense.

The book ‘Sang-e-Siyah’ is Afra’s fifth collection of short stories. Prior to this book four books have been published. Ten stories have been included in the book under review. In her stories she has deterred from sketching and developing her characters under some set psychological formula, as is usually done. These characters already exist in the society she lives in. All what she has done is to break them into fragments and exposing the hidden faces built in her characters through her words and analyses.

SHORT STORIES AND THEIR IMPACT ON SOCIETY — Afra’s first story titled ‘Be-chehra Log’ revolves around various issues that have devastating impact on a woman’s psyche who is the victim of political turmoil in her country like bomb blasts, suicide bombing and other life threatening issues. It is Zainab, her daughter who narrates how her mother bids her goodbye every day when she leaves for her office in the mornings in the rush hour. Zainab’s mother is portrayed as a typical worrying mother who stays home and is vocal about her apprehensions on issues such as Zainab not having proper breakfast etc. Her mother never forgets telling her not to drive fast lest she meets an accident. Though apparently Zainab seems to ignore her mother’s fears but starts following her instructions the moment she is out of her sight. She gets upset when she receives many calls in a day from her mother asking her if she was alright.

Zainab often wonders as to what had changed her mother into a worrying fully absorbed in fear of the unknown. She had never behaved like this before. Zainab is fearful when her mother believes that soon doom’s day was approaching. Zainab’s mother is fearful to go on streets and roads where people with no faces are roaming. She even imagines some shadows of people roaming in the aisles of her house. This short story was published in December 2014 issue of literary magazine ‘Savera’. That was the time when terrorist’s bomb blasts were at their peak. Famous critic Dr. Suhail Ahmad Khan comments that Afra Bukhari doesn’t make hue and cry about the injustices prevalent in the society. Instead she portrays emotions and psychological problems in a docile manner.

The second story titled ‘Sang-e-Siyah’ (black stone) is story of a girl belonging to a low middle class family who is ‘ambitious’ in the sense that she desires to have all the amenities of life immediately; amenities that are enjoyed after life-long struggle. This is a problem in most of the younger generation. Getting ride on his brother’s bike or travelling by bus and finding her home dirty on return adds to her misery and develops some sort of inferiority complex. The other factors which contribute to her misery are that after having done Masters in English she had to be content with Rs 8,000 salary for teaching in a school. When advised to apply in colleges/universities, she is sceptical that the present educational system makes teachers teach to intermediate classes and that too on contract basis at a very low daily wages rate which is valid during the semesters only when the students are in the college. On the home-front when families come for match making, her arrogant behaviour sends them away. Time passes and finally she gets attracted to a dark complexioned man who happens to be in show biz industry. Gradually the man gets her entangled in every day petty matters on phone and on taking her for long rides. Even her CV is not discussed but she is assured of modelling roles. He never visits her home asking for her hand in marriage. He is already married. One day he told the girl that he would be going away for few days and his telephonic contacts would be fewer. Gradually the girl accepts her fate and starts running after her own errands she had detested doing earlier. She makes peace with herself. Now she made her own breakfast and would walk to her school. This story with detailed minor happenings of such girls portrays the frustrations of lower middle class girls mostly ending up in wrong hands.

WHAT IS DECIPHERED FROM THESE STORIES? — from these short stories, one can decipher that Afra Bukhari’s characters emerge as strong victims of gradual deterioration in the society. Elder women in the house feel more insecure as their children enter into their own vocational and social lives with minimal place for their elders. Despite this bitter truth, potentially elder womenfolk start adding fears over and above their aging factor about their off-shoots’ safety socially and financially. Presently in every middle class household, parents have worked hard all their lives to give best education to their children. At the time when the parents retire, most of the children opt to settle in the West, Gulf or in their own jobs/business at home. They leave their parents with a promise to return after a small period of time. This ‘small period’ gets longer and now their children are stuck in the system like in quick sand. This is one of the factors adding to the loneliness of the parent’s back home where the conditions are portrayed as representative of deterioration if not that of a failed state but that of a deteriorating state, financially and morally. An average citizen is constantly fed news of the after effects of successive political parties having multiplied and enjoyed their wealth, locally and abroad through corruption and money laundering. The corrupt legal system supports them rather than apprehend them. This prevalent system creates economic havoc and the society faces inflation. Politically the international pressures on the nation are enhanced by the use of local dissidents creating lawlessness in the social fibre.

ROLE OF MEN-FOLK — in a way it is correct to say that Afra Bukhari has highlighted the problems of women-folk but that is not all. Most of the women problems are the creation of men and she had to study the mentality and psyche of men as well. The story of ‘Namehram’ is that of a man who loses his health to nature. His obstinacy of not opting for golden hand shake at his job makes his health even feebler than before. Afra has gone into the details of his feelings and emotions of his wife and his mother during his ailment. When he dies his mother takes over by stating to her daughter in law that he was no longer her Mehram by closing his eyes and covering his body with red blanket. The story ‘Rozan’ revolves around an opening which she calls as Rozan. The grandma is both deaf and blind and lives in a village in extreme poverty. The other characters in the story is Geetu Mamun whom grandma says to follow suit of the next door neighbour Rasheed who was clerk in LDA and had built a house due to his corrupt practices. Grandma stated that it was pity that her son had not been able to get their existing house registered in her name. Geetu shouted back that he would not follow Rasheed’s corrupt practices. Another character is that of Hamee who had come to the village to finish his schooling after his mother’s demise and look after his two daughters who were teaching at village school in extremely poor conditions. This plot has been picked by the author after closely observing the condition of poor farmers with no money, serving as servants of rich landlords. They live without getting education or proper houses or electricity, a situation which is still prevalent in Southern Punjab and Sindh provinces.

The short story ‘Aazmaish’ is a test case for a girl who in order to get suwaab of attending funeral of her aunt. She has to undergo as witness to bathing process by the woman giving bath to the dead body with cleaning with swabs. The bad smell turns into a nice odour once the funeral is ready. Another unique theme is tackled by Afra Bukhari in the short story ‘Pachtawa’ which deals with the mental condition of a young man entering into matrimonial bliss with a beautiful girl but feels emotionless after his marriage as he is not in love with her.

Afra Bukhari is a name in literature which stills awaits to be given her due. She has not only written her stories with each and every character’s details who is the victim of mental and psychological impact of the turmoil he/she has faced. Urdu literature has got enriched with her stories, treatment given to the characters in her stories.