Update on the weather: How much more rain will fall in Karachi? 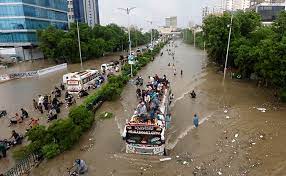 KARACHI: After a deluge in Karachi on Monday morning, the Pakistan Meteorological Department (PMD) has forecast further rain for the city.

Thunder cells are prevalent over Balochistan’s coastal area, according to the PMD, and are headed towards Karachi. As a result, the city could get some rain till Tuesday afternoon.

The latest weather update issued by the PMD suggested that Karachi is likely to receive more rain this afternoon (Monday). However, the showers will be moderate.

PMD Director Sardar Sarfaraz said while speaking on Geo News programme Geo Pakistan that the wet spell in most of the areas in Sindh and northern areas will continue only till Tuesday.

“Intermittent showers will occur in the city and will end by tomorrow (Tuesday) morning,” Sarfaraz said.

He further stated that the mercury may further dip to 12-13 degrees Celsius in the city. However, there will be no proper cold wave in the city till the first 10 days of January.

Sarfaraz said that Siberian winds have been intercepted by the western winds, therefore, Karachi will not witness an extreme cold weather spell.

“There is no possibility of [Karachi’s] temperature dropping to single-digits,” Sarfaraz said.

The PMD director said that the country is expected to receive heavy rain from January 2022 as rain and snowfall producing systems will keep entering Pakistan.

“We expect that a thick blanket of fog is cleared by the fourth or fifth day of January 2022,” he said.

Moreover, Balochistan will report another cold wave from December 31 or January 1, 2022, while Lahore will receive only light rain if it pours in the city.

The Met department reported that the highest rainfall of 5mm was recorded in Gulshan-e-Hadid and Qaidabad, 4.5mm in Surjani Town, 4.0mm each in PAF Masroor Base and Keamari, 3.8mm on University Road and 3.4mm rain at the airport.

Other areas of the city that received light rain include the Old City Area with 3.0mm of rain, PAF Faisal Base at 2.0mm, and the Jamia Al-Rasheed area, which recorded 2.6mm of rain.

The Motorways spokesperson cautioned drivers on the M-9 motorway to drive slowly to avoid their vehicles from slipping and causing accidents.

Light rainfall was reported in different areas of Punjab, Balochistan and Karachi on Sunday too.

The Met Office reported a day earlier that a westerly wind system had entered the provinces.

Various parts of Balochistan, including Quetta, Muslim Bagh, and Toba Achakzai, had received mild rainfall under the new system. Meanwhile, the snow had fallen in Ziarat Valley and the surrounding areas.