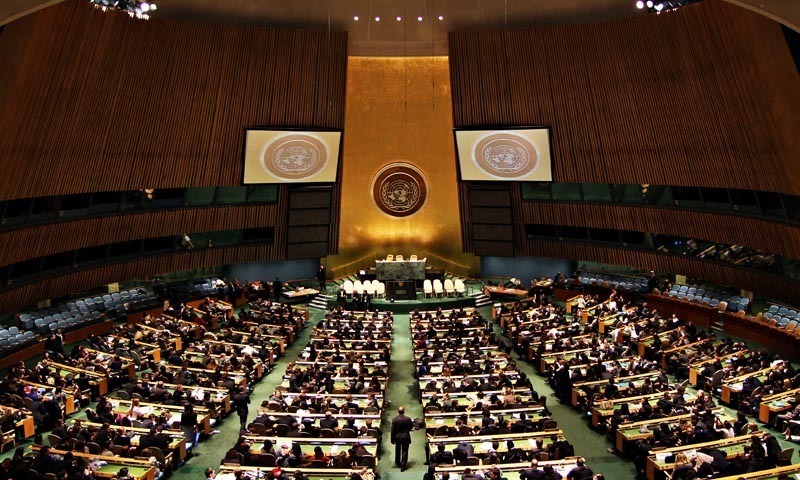 ISLAMABAD: The United Nations General Assembly (UNGA) on Saturday unanimously adopted a resolution sponsored by Pakistan, calling for a multidimensional response to counter all forms of disinformation that erode human rights.

The resolution titled “Countering Disinformation for the Promotion and Protection of Human Rights and Fundamental Freedoms” was recommended by the 193-member assembly’s Third Committee, which deals with social, humanitarian, and cultural issues.

Co-sponsored by a large number of countries, it was the outcome of extensive consultations with all member states against the backdrop of the exponential proliferation of disinformation around the world, which is exacerbating social discord, competing nationalisms, an infodemic amid the pandemic, discrimination, hate speech, stigmatisation, racism, xenophobia, Islamophobia and related intolerances.

Expressing his gratification over the resolution’s adoption by consensus, Pakistan’s Permanent Representative to the United Nations Munir Akram said, “This outcome was due to the diligent efforts of our team.”

He added that Pakistan will maintain its endeavour to fully implement the resolution and combat the virus of disinformation globally in cooperation with other member states and international organisations.

Under its terms, the resolution also highlights the negative impact on the enjoyment of human rights and fundamental freedoms of the rapid spread of disinformation, through online platforms and social media. It notes with concern that information communication technologies (ICTs) have enabled pathways for false or manipulated disinformation to be created, disseminated and amplified for political, ideological, or commercial motives at unprecedented scale, speed, and scope.

The resolution further underlines that this infodemic has affirmed that freedom of expression is not only a right but a shared responsibility, and that responses to the spread of disinformation must comply with international human rights law.

It also emphasises the responsibility of business enterprises, including online platforms and social media companies, to ensure that their commercial objectives do not undermine human rights.

They must not allow their platforms to be used for spreading disinformation, which leads to discrimination, incitement to hatred, hostility, violence, and polarisation.

The resolution also affirms the responsibility of states to counter the dissemination of disinformation which undermines the promotion of peace and cooperation among states as a consequence of disinformation campaigns directed against states and nations.

In this regard, it welcomes the efforts of the secretary-general to promote international cooperation for countering disinformation and his call for a “global code of conduct that promoted integrity in public information”.